Carole Baskin Has Access to Tigers and Other Vicious Animals

She could have potentially disposed of Don Lewis's body by feeding him to the animals.
Dec 4, 2020 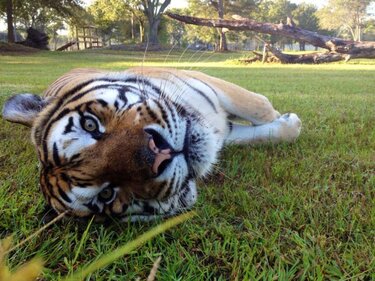 The sanctuary that Carole Baskin runs (and used to co-run with her husband, Don) houses lions, tigers, and numerous other carnivorous animals. Don's daughters from his first marriage suspect that the tigers were involved in their father's death in some way. They think Carole may even have fed his body to the animals. “It’s a perfect scenario to dispose of someone,” his daughter Donna told People magazine in 1998. “We were upset that the cops didn’t test the DNA on the meat grinder," she added. Carole denies this possibility entirely. In that same People Magazine article, she said: "My tigers eat meat; they don’t eat people...There would be bones and remains of my husband out there. I’m amazed that people would even think such a thing." In an article published in Big Cat Rescue after "Tiger King" debuted, Baskin fervently denied this claim again. She dismissed it as media bait. "This is the most ludicrous of all the lies," she wrote. "As Gladys and the daughters did everything they could to make life difficult for me after Don disappeared, they spread this rumor that they thought I had ground Don up and fed him to the cats. And the media loved it." Tigers generally don't show a preference for human flesh. Out of desperation or accessibility, however, they will eat it.
Written by

Tigers Don’t Eat Humans, So Why Did This One Kill Over 400 People?