And they only cast more suspicion on her.
December 4, 2020Updated 2 months ago 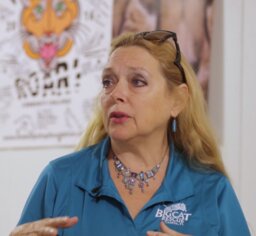 Michael Noonan/Wikimedia Commons
2 reasons
She claims Don had dementia and may have wandered off. But none of his friends or family members noticed any kind of memory loss whatsoever.
Agree|Info|Expand
Lightspring/Shutterstock.com
Carole Baskin claims that Don had developed memory problems and potentially dementia or Alzheimer’s. She thinks that this may have caused his disappearance. At one point, Carole blamed his flying hobby, saying that multiple plane crashes may have contributed to his memory issues. “I don’t think he was ever completely right after that last crash,” Baskin said. She claims that his memory problems got worse over time. Baskin claims that at one point a volunteer came to her suspecting that he may have Alzheimer’s. After he disappeared, Carole appeared on local TV, crying. “Maybe he doesn’t know where he is. Maybe he doesn’t know who to call,” she said. She spoke again about this in a post to Big Cat Rescue's Website. In it, she claims that his mental state had so deteriorated that he was dumpster diving. She claims he actually filed the restraining order to prevent her from hauling away his junk. Carole also said that he had such advanced mental problems that he was defecating outside. Close friends and family said that they saw no signs of memory loss whatsoever. His business associate, Wendell Williams summed it up succinctly, saying: “That’s all bull.” Don’s lawyer corroborated this. “He knew exactly what was going on,” he said of Don in the documentary.
Carole's behavior the night Don disappeared and in the months following was suspicious. And her police officer brother might have been involved.
Agree|Info|Expand
E News catches up with Carole Baskin after the series Tiger King—and more than 20 years after her husband's disappearance.
A few hours before Don disappeared, Carole went to pick up milk byproduct for the tigers—at 3 in the morning. She claims that her car broke down. She just so happened to run into her brother—a member of law enforcement—who gave her a ride. She says a few hours later is when she saw Don for the last time. But no one can corroborate her story. No one even knows for sure that he was alive at that point. Carole’s brother was a member of the sheriff’s department. Some suspect that he may have guided the investigation away from Carole. Not only was Carole's behavior that night suspicious, what she did after that was also strange. She soon went to his office to take files, but she did not call the police immediately to report him missing. It took several days for her to decide to make the call, and she called only after Don's secretary urged her to do so.
CLOSURE
Something is fishy in Carole Baskin's behavior concerning Don's disappearance. Whether it's a strange form of grief or an attempt to hide wrongdoing, only time will tell.
Written by