He said up-front that it was about persistent racial injustice. He also explained his thinking behind taking a knee.
Dec 4, 2020 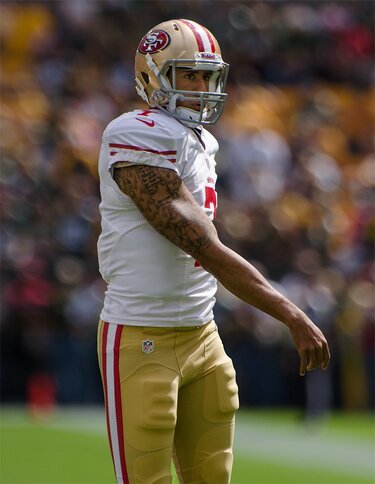 San Francisco 49ers vs. Green Bay Packers at Lambeau Field on September 9, 2012.Mike Morbeck
When the quarterback started his protest in August 2016, he was clear about its cause: ongoing racism in the U.S. "I am not going to stand up to show pride in a flag for a country that oppresses black people and people of color," he told NFL Media in 2016. "To me, this is bigger than football and it would be selfish on my part to look the other way," he said. "There are bodies in the street and people getting paid leave and getting away with murder." His protest was responding in particular to the racist—and often fatal—treatment of people of color by law enforcement. The month prior, Alton Sterling became the latest Black man shot and killed at the hands of the police. After the incident, Kaepernick spoke out, writing on his Instagram: “This is what lynchings look like in 2016!” He added: “Another murder in the streets because the color of a man’s skin, at the hands of the people who they say will protect us. When will they be held accountable?”
Written by

This is why Colin Kaepernick took a knee