From glorifying slavery to serving as a painful reminder of the bloodiest war in American history, these monuments cause harm.
Dec 4, 2020 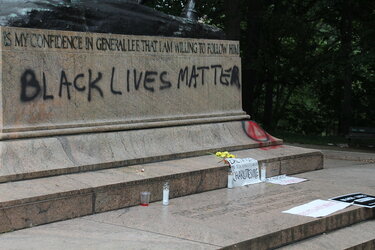 Confederate monuments can serve as a painful reminder, especially to Black people, of a time when their ancestors were held in slavery. According to the most recent census data, the majority of Black people in the U.S. reside in southern states, where the majority of the statues are located. For many of those millions of Black Americans living near these statues, monuments to generals of the Confederacy mean monuments to men who fought to keep their ancestors enslaved. Even for Black Americans whose ancestors were never slaves, the statues represent the long history of violence and discrimination inflicted upon Black people in America for centuries. The pain caused by Confederate monuments extends outside of Black communities, too. Confederate statues recall the most divisive point in American history. They celebrate a Civil War in which fellow Americans massacred each other by the thousands. Letting them stand glorifies division instead of symbolizing unity. The Washington Post described the debate over Confederate statues as "personal and painful." It draws in issues of family and history, whether descended from slave, Union, or Confederate. “We are talking about people’s ancestors," Gregg Kimball, a historian at the Library of Virginia, told the Post. “That’s a powerful thing you’re talking about there — you’re talking about somebody’s people.”
Written by

2010 Census Shows Black Population has Highest Concentration in the South

In the former capital of the Confederacy, the debate over statues is personal and painful