Corporations Have Historically Been Driven by Profitability

This is not unexpected, in part because of the widespread adoption of Milton Friedman’s shareholder theory, which states, “there is one and only one social responsibility of business—to use its resources and engage in activities designed to increase its profits.” In other words, he made the bottom line everyone's focus.
August 13, 2021Updated 1 month ago 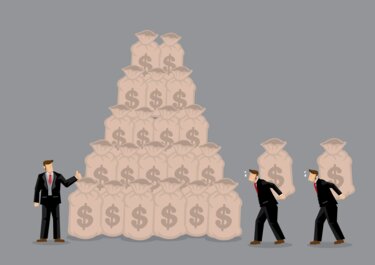 Workers piling up money to build the wealth of business owners.Shutterstock/UncleFredDesign
Milton Friedman was a world-famous economist who lived primarily during the last century. Although he made tremendous contributions to the University of Chicago's school of economics, one of his most impactful publications was an opinion piece he wrote for The New York Times in September 1970. The primary message of his article was that "the social responsibility of business is to increase its profits." Indeed, that was the very title of the article. Effectively, he was saying that businesses don't have social responsibility—or to the extent they do, that responsibility is absolved by simply making money. A 2013 article in The Washington Post explained that the 1970s was the ideal time for Friedman's school of thought to take root, because "globalization and deregulation...conspired to rob many major American corporations of the outsize profits they had earned during the 'golden' decades after World War II." The article, "How the Cult of Shareholder Value Wrecked American Business," explained that companies simply couldn’t make profits as easily as they had in the past, which led to a decline in corporate profitability and stock prices. What followed in the 1980s, according to the article, was that "companies with lagging stock prices found themselves targets for hostile takeovers by rivals or corporate raiders using newfangled 'junk' bonds to finance their purchases." This rude awakening—where well-financed adversaries were routinely taking over companies with depressed stock prices and firing management—rattled corporate executives everywhere. And so began a long trend of prioritizing share price, and therefore profitability, above all else. A whole ecosystem of support arose to cement this new philosophy and embed it into our economic system, according to the article. For example, business schools began to "indoctrinate students with the shareholder-first ideology and equip them with tools to manipulate quarterly earnings and short-term share prices" and corporate lawyers would back that up by "reflexively [advising] against any action that might lower the share price and invite shareholder lawsuits." And if that wasn't enough, Wall Street provided further encouragement by being "thoroughly fixated on quarterly earnings, quarterly investment returns and short-term trading" and of course, this was all "reinforced by gluttonous pay packages for top executives that are tied to the short-term performance of the company stock." It's no wonder that corporations have made profit their singular focus for so long. Influential people combined with a challenging economy set the stage for this powerful idea to become established, if not inseparable, from the very concept of business itself.
Written by

I think The Washington Post is reliable for this sort of research.

How the cult of shareholder value wrecked American business, The Washington Post, September 9, 2013.

A Friedman doctrine‐- The Social Responsibility Of Business Is to Increase Its Profits, The New York Times, September 13, 1970.