They repeat Trump's catchphrases over and over. This way, they don't have to engage in any real debate on his ideology.
Dec 4, 2020 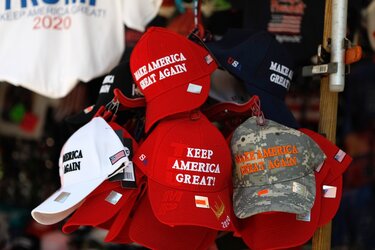 P_Wei/Getty Images
Trump supporters have taken to the president's slogans like few other supporters of a candidate in recent history. Whether calling his political rivals by their nicknames, or screaming his catchphrases at rallies, Trump's support is built on mimicry. Video footage from rallies shows supporters screaming such slogans as "Make America great again," "Build the wall," "Lock her up," or "Drain the swamp." As are many tactics of Trump supporters, this one is built to allow them to sidestep real debate of Trump's policies or beliefs. They can simply repeat a slogan instead of having a real discussion. One of Trump's most popular slogans during the campaign was "drain the swamp." This was meant to reference what Trump claimed were corrupt, career-politicians whose seats in public office had been paid for by big banks. And yet, when Trump was elected, one of the first people he selected for a cabinet position was Steve Mnuchin to serve as secretary of the treasury. Mnuchin is a former investment banker with Goldman Sachs, the essence of the "swamp" that Trump spoke out so vehemently against. When confronted with this reality, Trump supporters can only offer weak explanations that somehow manage to still incorporate the slogans themselves. For instance, one supporter shrugged and simply said: “There are parts of the swamp that are gonna come in.”
Written by