There are numerous reasons Democrats should focus efforts on Georgia's Black vote and change the Democrats' historic campaign approach to courting voters in the Peach State.
Last updated on Nov 29 , 2020 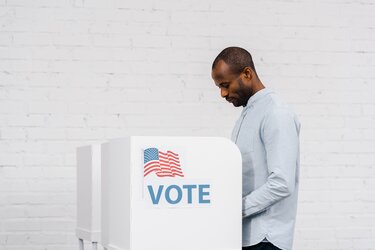 LightField Studios/Getty Images
Interested in how your views align with this article and the editor?

10 reasons
The Black vote could be critical to the outcome of Georgia’s runoff and which party gets a Senate majority. Those voters may have helped the state "turn blue" in the presidential election. The same could be true for Democrats in the Senate runoff happening in Georgia.
Black voters may swing the race, according to national and local news outlets.
Republicans may stay in power in the U.S. Senate if the Black vote isn’t mobilized in Georgia. Black voters have historically voted Democrat. If their power is not seized upon, Republicans will have a better chance at holding onto their seats.
Made360/Shutterstock.com
Black voters—and Black women voters in particular—have historically voted Democrat. In the 2020 presidential election, for instance, an estimated 90 percent of Black women voted for Biden. Without their support for Democratic candidates, Republicans are likely to stay in power. Black political leaders in Georgia, especially women such as Stacey Abrams, Atlanta Mayor Keisha Lance Bottoms, LaTosha Brown, and Nse Ufot, were instrumental in mobilizing Black voters in the past several years. Their tireless efforts included voter registration drives at churches and knocking on doors in black and Latinx communities. Of the 5 million Georgians who voted in the presidential election, some 1.2 million of them were Black. Those same political organizers are using similar efforts in the Senate runoff and will be decisive in fending off Republican opponents. "We've done it before and we will do it again," said Ufot, CEO of the New Georgia Project, a nonpartisan voter registration group started by Stacey Abrams. "Never before in my lifetime have Georgia voters been more important to the state of this nation." Since the presidential election, Abrams's organization Fair Fight has raised an additional $3.6 million for the January runoff. No matter the outcome, pundits predict the race will be close, but support from Black voters could turn a close race in the Democrats' favor. As Michael Golden of the Chicago Tribune wrote: "If the party ends up winning those two seats, effectively seizing control of both chambers of Congress and the White House, it will have African Americans voters — and leaders — to thank for it."

Believe
The race’s only Black candidate, Rev. Raphael Warnock, has a better chance of winning if Democrats can turn out the Black vote. The reverend is a relative newcomer to the political arena. And in order to win this close race, Warnock will need Black voters' support.
Raphael Warnock/Wikimedia Commons
Warnock and incumbent Sen. Kelly Loeffler have been locked in a tight—and often fractious— race for one of Georgia's Senate seats. Although Warnock’s white Republican opponent garnered fewer votes than Warnock in the November 2020 general election, she could prevail in the January 2021 runoff if the pattern of Black voter drop off in Georgia’s runoffs persists. If voter outreach and GOTV efforts do not focus heavily on Black voters, Warnock’s chances—especially against his independently wealthy, GOP machine-backed opponent —will suffer. In order to win, Warnock will need to mobilize Black voters in particular, who historically vote Democrat. "In Georgia, Blacks can assume the role of a decisive voting bloc," wrote American studies professor, Roger House, for The Hill.

Believe
The power of the Black vote has been evidenced in recent, high-profile instances. Black votes can make the difference between a win and a loss for Democratic candidates. Especially in recent elections, voters of color have turned the tide for several Democratic candidates.
FatCamera/Getty Images
Long-term data shows that Black Americans (and Black women in particular) vote Democrat. Their votes have proved vital in southern states such as Alabama. And they're becoming an even more important voting bloc as the number of eligible nonwhite voters steadily drops.
Robert P. Alvarez / Shutterstock.com
National exit polls and voting data show nonwhite voters strongly trend Democratic and that they are turning out in record numbers. Since 2000, the number of eligible nonwhite voters has dropped in all 50 states, with 10 states seeing a double-digit drop, according to the Pew Research Center. In battleground states in particular, nonwhite voters are becoming increasingly crucial in tight elections. In Arizona, for instance, nearly one out of four eligible voters is Latino, according to the same Pew report. In 2017, Black women voters were the force behind electing the first Democratic U.S. senator from Alabama in a quarter of a century. Black voters were also responsible for Biden’s lead in states that ended up giving Biden his win, such as Nevada and Pennsylvania.

Believe
Black voting rights advocates such as Stacey Abrams have proved crucial in rallying black voters. People of color have been working nonstop to mobilize their communities for years now. And their efforts are paying off, swaying elections for the Democratic Party.
Albert H. Teich / Shutterstock.com
Thanks to the efforts of activists and politicians—such as Stacey Abrams, who has worked tirelessly to create a diverse, multiracial coalition of Democratic voters—Georgia was able to turn blue in 2020, a once-elusive victory in the deep South. And she's not the only one. Abrams's organization, Fair Fight, was founded in 2018 to combat voter fraud in Georgia. That group extends far beyond Abrams's efforts alone. Fair Fight has been able to register thousands of eligible voters and ensure that their ballots are counted. "Efforts to discourage and disenfranchise voters—in voter registration, ballot access, or counting of votes—have a catastrophic effect on our democracy and our communities," wrote Fair Fight, adding, "The facts and faces of voters from the 2018 election in Georgia convey the insidious design and pervasive impact of voter suppression."

Believe
Georgia could make history in more than one way by focusing outreach on Black voters. A win—or two—in the Georgia runoff races would be groundbreaking. Not only could this result in Georgia's first Democratic senator, it may signal a shift in this historically red state.
SeventyFour/Getty Images
If Rev. Raphael Warnock wins the election, he will be Georgia's first Black senator. There have only been 10 Black senators in US history. None of them came from Georgia.
Reverend Raphael Warnock (second from left) is pictured laying a wreath at the gravesite of Dr. Martin Luther King Jr., in 2009.
There has never been a Black winner of a race for the United States Senate in the history of Georgian politics. Since Hiram Revels was elected to the U.S. Senate in 1870, there have only been nine other Black senators. That's a total of 10. Of those, only three were from southern states: two in Mississippi and one in South Carolina. Every Black senator who has run in Georgia has lost. That's two seats up for grabs every six years in elections beginning in 1788 through 2016. Roughly 76 senate elections over 228 years in Georgia and only non-Black winners. A state with 32% of the population being Black and 0% making it into the United States Senate. It's a streak that would be broken if Rev. Raphael Warnock wins.

Believe
Democrats could help Georgia move away from its runoff election rules’ racist undertones by prioritizing Black voters. In Georgia, candidates must get more than 50 percent of the vote to win an election; if no candidate achieves this, the race goes to a runoff. This rule dates back to segregationist efforts to dilute the Black vote.
Niyazz/Getty Images
Historically, Georgia runoffs have seen a decrease in Democratic voter turnout, especially among Black voters, compared to the general elections that preceded them. Many political experts believe Georgia's runoff rules were designed by segregationists in the 1960s to deter Black voter turnout, and evidence shows the segregationists' machinations worked. In 1990, the Department of Justice tried to overturn the majority voting system in Georgia after finding at least 35 Black candidates lost in a runoff despite having won the most votes in their original primaries. Data presented to the 11th Circuit Court in the 1998 case Brooks v. Miller (which challenged the majority-vote requirement) showed that between 1970 and 1995, 85 of 278 runoffs in Georgia resulted in a candidate losing in the runoff after having won a plurality of the votes in the initial primary election. Sixty-five percent of those 85 cases involved a Black candidate ultimately losing in the runoff. Though Brooks v. Miller did not find in favor of the plaintiffs—27 Black voters joined by the Department of Justice—the court did note that majority voting, like that used in Georgia, indicated "the virus of race-consciousness." And Denmark Groover, the Georgia state representative and self-professed segregationist who proposed the majority vote and runoff rules in 1963, admitted he did so to undermine Black political strength. Though Groover was a Democrat, the runoff rules he introduced have since tended to favor Republicans. And now, Democrats have a historic opportunity to right these historic wrongs. They can break the pattern of Black voter drop-off in the state's runoffs by mobilizing Black voters and dedicating substantial voter outreach efforts among Black communities. While the state's runoff rules may yet stand, and while those runoff rules have blatant racist undertones, that does not mean the historic drop-off among Black voters has to continue.

Believe
Black voters could help shift Georgia from red to blue. Once a reliably red state, Georgia's voters have put Republicans on notice, giving Joe Biden a narrow victory over Trump.
logolis/Getty Images
Georgia's population has grown by almost 3 million in the last 20 years. The young and the foreign-born populations have boomed, causing a growth in diverse and progressive-leaning voters. While Democratic voters were once limited mostly to Georgia's large urban centers, they're on the rise in suburbs that were once reliably Republican. Georgia Democrats themselves have seen a shift from the old guard's "blue dog" tenets to more liberal values. These changes are certainly key to Georgia's slow but steady move toward to the blue column, but it's the strong momentum among Black voters that many credit for 2020's more dramatic shift away from the Republican Party in the Peach State. Black voters are a big reason Biden took the lead he did nationally and in traditionally red states like Georgia, where he was the first Democratic presidential candidate to win in almost 30 years. They also sent a message in the ousting of Republican Jackie Johnson, the incumbent DA candidate for Brunswick Judicial Circuit who faced harsh criticism and sparked a wave of nationwide protests because of her poor handling of the shooting of Ahmaud Arbery. If Georgia's Black voters turn out for the January 2021 Senate runoff the way they did for the 2020 general election, they could deliver a stunning win for Democrats in the form of two Senate seats—effectively swaying the U.S. Senate from red to blue. Four years of racist rhetoric from President Donald Trump and inaction among his Republican enablers have mobilized liberal-leaning voters and voters from diverse communities. In a deep-south state with a history of violent racism, these factors could usher in a blue Georgia.