In Georgia, candidates must get more than 50 percent of the vote to win an election; if no candidate achieves this, the race goes to a runoff. This rule dates back to segregationist efforts to dilute the Black vote.
Dec 6, 2020 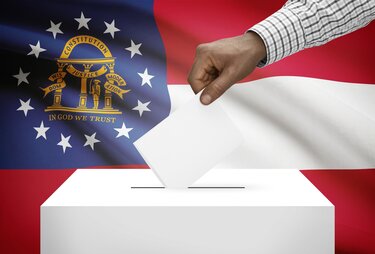 Niyazz/Getty Images
Historically, Georgia runoffs have seen a decrease in Democratic voter turnout, especially among Black voters, compared to the general elections that preceded them. Many political experts believe Georgia's runoff rules were designed by segregationists in the 1960s to deter Black voter turnout, and evidence shows the segregationists' machinations worked. In 1990, the Department of Justice tried to overturn the majority voting system in Georgia after finding at least 35 Black candidates lost in a runoff despite having won the most votes in their original primaries. Data presented to the 11th Circuit Court in the 1998 case Brooks v. Miller (which challenged the majority-vote requirement) showed that between 1970 and 1995, 85 of 278 runoffs in Georgia resulted in a candidate losing in the runoff after having won a plurality of the votes in the initial primary election. Sixty-five percent of those 85 cases involved a Black candidate ultimately losing in the runoff. Though Brooks v. Miller did not find in favor of the plaintiffs—27 Black voters joined by the Department of Justice—the court did note that majority voting, like that used in Georgia, indicated "the virus of race-consciousness." And Denmark Groover, the Georgia state representative and self-professed segregationist who proposed the majority vote and runoff rules in 1963, admitted he did so to undermine Black political strength. Though Groover was a Democrat, the runoff rules he introduced have since tended to favor Republicans. And now, Democrats have a historic opportunity to right these historic wrongs. They can break the pattern of Black voter drop-off in the state's runoffs by mobilizing Black voters and dedicating substantial voter outreach efforts among Black communities. While the state's runoff rules may yet stand, and while those runoff rules have blatant racist undertones, that does not mean the historic drop-off among Black voters has to continue.
Written by

Why Georgia has runoff elections

Democrats Work to Defy History in Georgia Runoffs That Have Favored G.O.P.