Trump's tax returns show that the president has only paid a few hundred dollars per year in taxes for the past several years. Many experts have suggested that he's either a terrible businessman—or he's committed serious tax fraud.
Dec 4, 2020 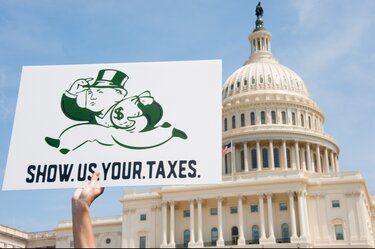 Rena Schild / Shutterstock.com
Donald Trump claimed he "pre paid" millions of dollars in federal income tax, however a New York Times investigation showed the president only paid $750 per year for the year before and his first in the White House. Records show he paid no income taxes at all in 10 of the previous 15 years, according to NYT's look at IRS paperwork. He got away with this by reporting heavy business losses in those years. The president ran his campaign on his reputation as a billionaire, brilliant businessman. It simply is not true according to his tax records. Trump is also in the midst of a tough election and a dispute the past ten years with the IRS over auditing his returns. The agency has doubts about a tax refund of more than $72 million he received, even after he declared losses on businesses. If the IRS wins, the president could owe the government $100 million. The records also show Trump is heavily reliant on income from his businesses that create major conflicts with his duties as president. The president's defenders have often said Trump has paid millions in "personal taxes" but they are likely confusing those payments with income taxes. Trump, like most Americans, has paid social security, Medicare, and taxes for household employees.
Written by