And many in the party stood by him. Even the gross mistreatment of children as young as toddlers was not enough for Republicans to turn against Trump.
Dec 4, 2020 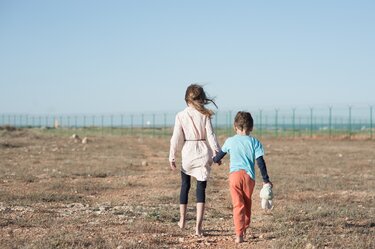 Ruslanshug/Getty Images
In 2018, President Trump instituted a "zero-tolerance" policy at the U.S.-Mexico border. Migrants and asylum seekers, many of them fleeing violence in South and Central America, were all to be referred directly to the Department of Justice for prosecution. If those adults were traveling with children, the kids were sent to separate holding facilities, often hundreds of miles away. Some of the holding facilities for children resemble cages, and children as young as toddlers were placed there to await their parents' fate. While the facilities were constructed and first used under the Obama-Biden administration, there was no "zero tolerance policy" in effect. Under Obama, children could wait for their parents' judicial process while living with a relative or friend of the family. Under Trump, that was no longer possible. Several thousand children passed through these detention facilities during Trump's term. And the conditions described by those who visited them were often sparse and unhealthy. Observers described children on bare floors under foil blankets. Access to basic hygiene supplies and medical attention was often limited or non-existent. A rare few Republicans, such as former first lady Laura Bush, spoke out against the policy. Bush compared the facilities to the Japanese internment camps used during World War II. Many, however, said they supported the policy. “You don’t ever want to be separating families, but at least the president focused attention on all the people crossing the border illegally" one Trump supporter in Texas told the New York Times. “It hurts my heart to see it, but the culpable ones are the parents who subject their children to crossing the border, or who send them by themselves,” a Trump campaigner said. The dissonance from the Republican party paled in comparison to the overwhelming support, however reluctant, from the majority of the party.
Written by

Saw the photos of the children, heard Trump's words of support
Sources

Republicans Dislike Separating Families. But They Like ‘Zero Tolerance’ More.