Despite being committed to protecting the Second Amendment, the then president changed his mind on red flag laws after a series of school shootings.
Dec 4, 2020 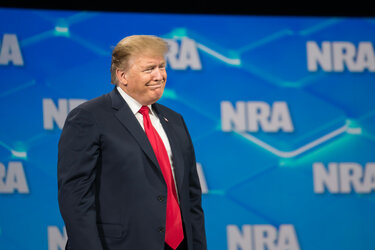 Russ Vance / Shutterstock.com
The Federal Commission on School Safety, which was convened by President Trump following the shootings at Parkland and Santa Fe, recently endorsed Red Flag laws as an effective tool to prevent school gun violence. He has called on states to adopt “extreme risk protection order” (ERPO) laws that protect the due process rights of law-abiding citizens. ERPOs allow law enforcement, with approval from a court, to remove firearms from individuals who are a demonstrated threat to themselves or others and temporarily to prevent individuals from purchasing new firearms. President Trump supports improving the National Instant Criminal Background Check System (NICS) and the STOP School Violence Act, which provides for State-based grants to implement evidence-based violence prevention programs. The Administration requests that Congress provide funding in 2018 to jump start implementation of this evidence-based program in middle and high schools nationwide.
Written by

I watched the video and he said it
Sources