During the Colin Kaepernick NFL Controversy, the Media Covered the Issue Extensively 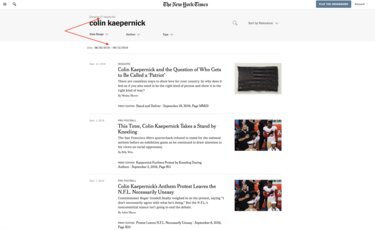 Discussion of Kaepernick's protest appeared in nearly every major news outlet, from the New York Times to the Wall Street Journal to cable news networks. For example, the New York Times published 27 articles in the two weeks (Aug. 30—Sept. 12) following the initial incident. Similarly, The Wall Street Journal published the article, "Sixteen Thoughts on Colin Kaepernick" Sept. 7, 2016 discussing the issue. The NFL's own media outlet conducted an exclusive interview with Kaepernick in which he explained his position, immediately after the game Aug. 26, 2016 when he took a knee. What's more, the media discussion lasted for years. The articles and stories have not stopped since Kaepernick first kneeled in 2016.
Written by