There are often emotional and behavioral warning signs of the attacker's plans.
December 4, 2020Updated 4 months ago 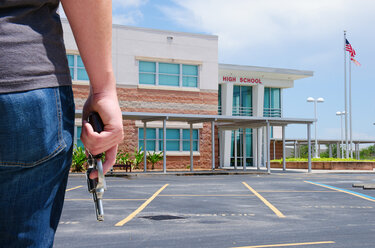 Mike Focus/Shutterstock
2 Reasons
Attackers usually exhibit some indication of what they're about to do. A Secret Service study showed there are clear predictive indicators.
Agree|Info|Expand
Goir/ iStock / Getty Images Plus
The United States Secret Service and the United States Department of Education studied targeted school violence incidents and found behavioral warning signs that caused others to be concerned in 93% of cases. The Secret Service National Threat Assessment Center studied 41 school attacks from 2008 to 2017 and found that none of the school shootings were impulsive acts and all of them could have likely been prevented. The study found most of the weapons students used came from their home, many of the shooters were absent from school in the days prior to the shooting because they were suspended due to bad behavior, the disgruntled students were often treated poorly and teased by classmates in person and online, and some of the students exhibit mental health disorders and/or were suicidal. More than 75% of the attacks were in response to some sort of incident between the shooter and another student. More than half the attacks also involved the shooter and a gripe with a school administrator, however.
In fact, people have prior knowledge of a shooter’s plans in the vast majority of cases. Attackers are often clear about what they will be doing with family or friends.
Agree|Info|Expand
Demonstrators in front of the White House protest government inaction on gun control, following a deadly shooting in a south Florida high school with an AR-15.bakdc / Shutterstock.com
The United States Secret Service and the United States Department of Education studied targeted school violence incidents and found that in 81% of incidents, other people, most often the shooter’s peers, had some type of knowledge about the shooter’s plans. These incidents were not impulsive, but plans were often carried out after an incident with a classmate or school administrator. Most of these attacks were done alone but the attacker being bullied, being unable to deal with some failure or loss of a job, status, or relationship and the resulting withdrawal, anger, or depression were often clues to friends and family that something may be in the works. Other times out of the ordinary behavior could have been an indicator like one attacker asking his friends to help him get ammunition for one of his weapons, making modifications to their existing weapons to make it easier to conceal beneath their clothes. One attacker even shopped for a long trench coat with his mother and then cut the pockets out of the coat to make it easier to hold a weapon through the holes. In nearly two-thirds of the incidents, more than one person—usually a friend or sibling—had information about the attack before it happened or at least that something "bad" or "big" would occur. Many even knew the date and time, often telling several other classmates about the plans as well. However, adults knew about the plans to attack in only two of the more than 40 incidents studied. Adults did sometimes know about the attackers' history and experience of weapons, which was often an indicator some sort of plan was in the works.
CLOSURE
The warning signs are present and often very clear in the case of many school shooters. To say "we had no idea this could happen" is no longer a good excuse."
Written by