He claimed the protests disrespected the armed forces. Goodell argued that taking a knee was unpatriotic.
December 4, 2020Updated 4 days ago 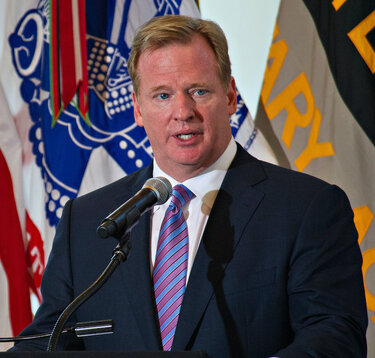 League commissioner Roger Goodell
Responding to the dispute in September 2016 over whether Colin Kaepernick and other players should be permitted to take a knee during the national anthem, NFL commissioner Roger Goodell made an ambiguous statement, but it was one that did not openly support Kaepernick. In it, Goodell said he appreciated the fact that players had a public platform. He also said that they have the right to "want to see change in society." At the same time, he made it somewhat clear that he didn't agree with the tactic. Goodell hinted that the protest was disrespectful to patriotic sentiment. "I think it's important to have respect for our country, for our flag, for the people who make our country better; for law enforcement, and for our military who are out fighting for our freedoms and our ideals," he said. "These are all important things for us, and that moment is a very important moment. So, I don't necessarily agree with what he is doing."
Written by

John MalikLEAD
JM
Jess M
Writers agree with this fact based on:

New NFL policy: Teams to be fined if players kneel during anthem