From extramarital affairs to business disagreements, the couple's marriage was not going smoothly.
Dec 4, 2020Updated 9 days ago 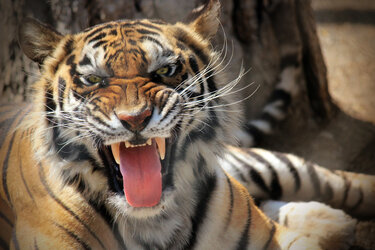 3 reasons
Don's extramarital affairs were well-known and well-documented—Carole herself admitted to knowing about them. He likely cheated on Baskin with multiple women.
Agree|Info|Expand
In the Netflix special, "Tiger King: Murder, Mayhem and Madness," Episode three at the 13:43 mark, Gladys Lewis Cross, Don's first wife, said he had a girlfriend in Costa Rica. She goes on to say that if Carole thought she was "all he needed" that that "was never going to happen." In that same episode, Dale Lively, Don's mechanic, said, "He liked ladies, I'm sure. I would see him with two or three different ones, you know?" Baskin was well-aware of these dalliances. She wrote that Lewis would travel frequently to Costa Rica for sex, especially when she was menstruating. His philandering was so well-known that even Don's own daughter referred to him as a "sexaholic."
In their business partnership, he wanted to move Big Cat Rescue to Costa Rica. Baskin did not want to let this happen.
Agree|Info|Expand
A jaguar pictured in the jungle of Costa Rica jamenpercy/Getty Images
In the Netflix special, "Tiger King," John Marsicano, the lead homicide detective gives a clue as to the disappearance of Don Lewis. "The long-term plan, according to the investigation, was that he would eventually move the Big Cat Rescue—or Wildlife on Easy Street as it was known then—down to the Costa Rica area," Marsicano told the filmmakers. Don was obsessed with Costa Rica. He would spend as much time as possible down there. He went not only to have sex with his many mistresses but to search out business opportunities. The wildlife park in Florida was only 69 acres—but in Costa Rica, Don had purchased 200 acres of land to build a new park. Carole seemed happy with her life in Florida and showed no interest in relocating to Costa Rica. But as Don was the main source of the sanctuary's funds, she may have had no choice had he decided to move.
Don and Carole fundamentally disagreed about breeding tigers. He saw Big Cat Rescue as a money-making endeavor, while Carole increasingly saw it as a conservation effort.
Agree|Info|Expand
format35/Getty Images
When Don and Carole first fell in love, they were both animal-lovers. They happily acquired exotic animals and bred tiger cubs. But their paths started to diverge after several years. Don became more interested in the money-making aspect. And Carole would later become a conservationist, speaking out harshly against those who bought, bred, or sold exotic animals. In the Netflix special, "Tiger King," Lynda Sanchez, Don's daughter from his first wife, confirmed this. "Carole wanted the animals just to collect and love and he looked at it more as a business," she said. Carole herself admitted that their attitudes were changing. Where once they were on the same page, that was no longer the case in the years leading up to his disappearance. "Don and I had differing feelings about conservation and breeding," she said in the documentary. "He loved cubs, he loved breeding cats. He would go down to Costa Rica about once a month and every time he was in Costa Rica, I'd have the vet out here and I would neuter and spay as many cats as fast as I could." Since Don's death, Carole has become well-known in the conservation world as an animal rights activist. Her feud with Joe Exotic first began over Joe's treatment of tiger cubs.
CLOSURE
Whether in their professional or personal life, Carole and Don were hardly on the same page. And those disagreements only escalated in the months leading up to his disappearance.
Written by