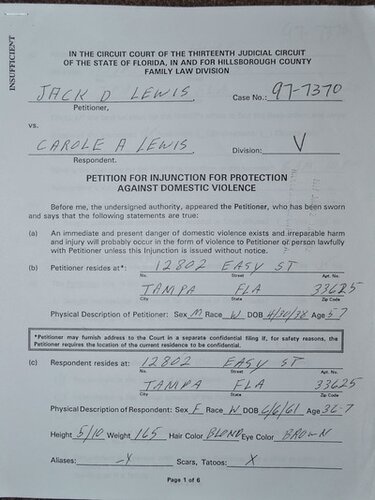 On June 12, 1997, Don Lewis filed a restraining order against Carole Baskin. Lewis claimed that Baskin had threatened to kill him. He also said that she had hidden his gun. Baskin dismissed the idea that her husband actually believed he was in danger. She claims he just feared she would haul away some of his junk when he was in Costa Rica. "McCarthy said Don told him his life was in danger, but didn’t say by whom, and if he was in danger, why did he bring home more cubs for me to have to raise?" The law agreed: Don's restraining order request was denied. In general, in order to receive a restraining order, the person requesting it has to prove a credible threat. Otherwise, threats like this fall under freedom of expression. As Don's lawyer Joseph Fritz said in the documentary, that restraining order was “dead on arrival” because of the first amendment. “We don’t restrain free speech in this country—we punish it after it’s done," he said.
Written by