He saw Big Cat Rescue as a money-making endeavor, while Carole increasingly saw it as a conservation effort.
Dec 4, 2020 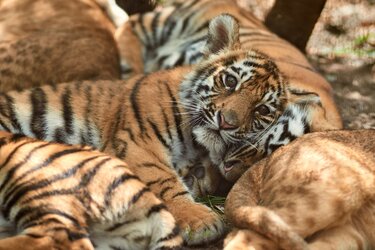 format35/Getty Images
When Don and Carole first fell in love, they were both animal-lovers. They happily acquired exotic animals and bred tiger cubs. But their paths started to diverge after several years. Don became more interested in the money-making aspect. And Carole would later become a conservationist, speaking out harshly against those who bought, bred, or sold exotic animals. In the Netflix special, "Tiger King," Lynda Sanchez, Don's daughter from his first wife, confirmed this. "Carole wanted the animals just to collect and love and he looked at it more as a business," she said. Carole herself admitted that their attitudes were changing. Where once they were on the same page, that was no longer the case in the years leading up to his disappearance. "Don and I had differing feelings about conservation and breeding," she said in the documentary. "He loved cubs, he loved breeding cats. He would go down to Costa Rica about once a month and every time he was in Costa Rica, I'd have the vet out here and I would neuter and spay as many cats as fast as I could." Since Don's death, Carole has become well-known in the conservation world as an animal rights activist. Her feud with Joe Exotic first began over Joe's treatment of tiger cubs.
Written by