Kaepernick Kneeled After Consulting with a Military Vet

Kaepernick discussed the issue with veteran Nate Boyer before he took the knee—explicitly so he would be able to go about his protest in a respectful way. He told Kaepernick kneeling would be more respectful than sitting during the national anthem.
Dec 4, 2020Updated 14 days ago 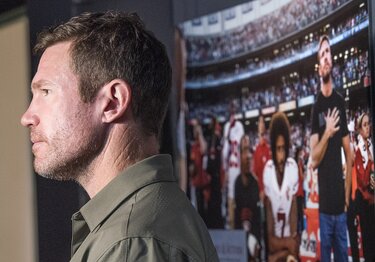 Retired Army Green Beret Nate Boyer is credited with convincing Kaepernick to kneel during the national anthem. During the first games that Kaepernick protested during the national anthem, he simply sat on the bench rather than standing with the rest of the team during the anthem. Boyer was among many Americans who had been angered by Kaepernick's decision to sit. Boyer himself is even a former NFL player, having played a brief stint for the Seattle Seahawks. Instead of letting his feelings get the better of him, he wrote a letter voicing his concerns to Kapernick. Boyer explained all that the flag and the anthem meant to veterans like himself. To his suprise, Kaepernick reached out, asking to meet with him in the team's hotel lobby. They discussed their differing feelings about the flag and the protest. As Boyer later explained to NPR: "I suggested him taking a knee instead of sitting even though I wanted him to stand, and he wanted to sit. And it was, like, this compromise that we sort of came to. And that's where the kneeling began." Boyer came up with the idea of kneeling because he thought it was more respectful. As he pointed out in the same interview, someone kneels when they're being knighted, or asking someone to get married. It's a sign of paying respect.
Written by

The Veteran And NFL Player Who Advised Kaepernick To Take A Knee, NPR, September 9, 2018, Michel Martin.