Beyond expressly seeking out the counsel of veterans to be respectful of their sacrifice, Kaepernick made it clear in many interviews that he was not trying to be unpatriotic.
Dec 4, 2020 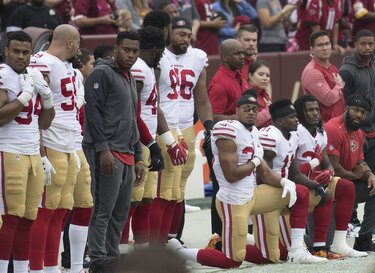 Kaepernick said from the start that he was not trying to be unpatriotic or to disrespect the armed forces, which is why he sought out the most respectful way of voicing his dissent. In fact, the opposite could be argued: Protest is patriotic. As one journalist wrote: "It is a nationalist insinuation to suggest that a flag could be 'disrespected' through protest. Airing one’s voice is a hallmark of a democracy, not a threat to it." By using his position of power to speak out for the voiceless, he was fighting for equality and advocating for some of America's most foundational values. In exercising his right to free expression, he was fighting for "freedom, liberty, and justice for all." Longtime NBA coach Gregg Popovich argued that what Kaepernick did was the essence of patriotism. "Being a patriot is somebody that respects their country and understands that the best thing about our country is that we have the ability to fix things that have not come to fruition for a lot of people so far," he told ESPN. Popovich continued, saying: "Being a critic of those inequalities does not make you a non-patriot. It's what makes America great, that you can say those things and attack those things to make them better. That's what a lot of other countries don't have."
Written by