Their votes have proved vital in southern states such as Alabama. And they're becoming an even more important voting bloc as the number of eligible nonwhite voters steadily drops.
December 6, 2020 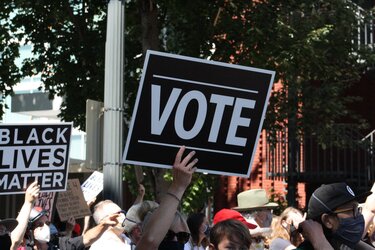 Robert P. Alvarez / Shutterstock.com
National exit polls and voting data show nonwhite voters strongly trend Democratic and that they are turning out in record numbers. Since 2000, the number of eligible nonwhite voters has dropped in all 50 states, with 10 states seeing a double-digit drop, according to the Pew Research Center. In battleground states in particular, nonwhite voters are becoming increasingly crucial in tight elections. In Arizona, for instance, nearly one out of four eligible voters is Latino, according to the same Pew report. In 2017, Black women voters were the force behind electing the first Democratic U.S. senator from Alabama in a quarter of a century. Black voters were also responsible for Biden’s lead in states that ended up giving Biden his win, such as Nevada and Pennsylvania.
Written by

The Changing Racial and Ethnic Composition of the U.S. Electorate