They voice criticism of the movement, even amid racist violence. That kind of leadership sets the tone for the nation, making it acceptable for average citizens to ignore Black Lives Matter.
December 4, 2020Updated 4 months ago 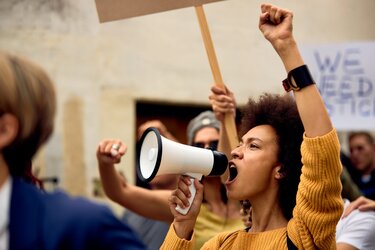 Drazen Zigic/Getty Images
6 Reasons
Racist incidents continue despite protests. And they show no sign of slowing down. If anything, developments in technology have only showed the insidiousness of racist violence in the U.S.
Agree|Info|Expand
IStock.com/Aja Koska
The Cleveland Indians refused to change their name. Even under increased pressure, the Indians name remained unchanged. This is just one symptom of a broader disrespect for Native American tribes.
Agree|Info|Expand
For years, there were ongoing protests against the Indians’ team name, mascot, and common game chants. They recently removed their mascot, Chief Wahoo, but they have opposed changing the team name. Despite this, owner Paul Dolan said in 2019: “Not only are we adamant about keeping the name Indians, but the Commissioner (Rob Manfred) is similarly supportive of the name.” In July, Dolan agreed to meet with Native American groups to discuss the name, but he did not make any promises to change the name. Many indigenous people have been pressuring the stakeholders for years to change the name they say is offensive. In August, some 80 businesses and organizations signed a petition asking for a name change. Even with mounting pressure, the Indians have yet to announce an official name change.
Hundreds of Confederate statues remain. They are displayed in 31 states and Washington, D.C. Even states that were never in the Confederacy bear the marks of that uprising.
Agree|Info|Expand
There are at least 700 Confederate statues spread across 31 states and Washington, D.C. Other estimates put the number of Confederate memorials as high as more than double that, or nearly 2,000. The statues exist far outside of the former Confederate states themselves. The Confederacy itself was only 11 states. Virginia and Texas continue to have the highest number of Confederate statues of any state. Virginia has well over 100 Confederate statues—with more than 41 dedicated to General Robert E. Lee alone. For every Confederate statue that has come down in the past few months, ten still remain.
The "All Lives Matter" slogan was acceptable for a long time. That slogan was widespread throughout the United States. Even the vice president used it.
Agree|Info|Expand
Among certain groups of Americans, saying "all lives matter," or being actively against the Black Lives Matter movement was still acceptable. As recently as June of this year, Vice President Mike Pence refused to say "black lives matter." Instead, he repeated again in a TV interview: "I really believe that all lives matter." "All lives matter" might seem like an innocuous term, but its meaning is ignorant at best and racist at worst. Activists have often used the metaphor of a house on fire: if a neighbor's house is on fire, there's no sense in saying "All houses matter" and spraying water on the house that is not on fire. "No one's saying that your life doesn't matter," blogger Ayanna Lage told CBS news. "What we're saying… is all lives can't matter until black lives matter."
Confederate flags and symbols have continued to be permitted in many places. They adorn everything from private property to public land. They even fly in state houses.
Agree|Info|Expand
Confederate iconography continued to be displayed in spite of concerted efforts by protesters. In parts of the South, both in former Confederate states and otherwise, Confederate flags, bumper stickers, and other paraphernalia are ubiquitous. They can be seen flying in front yards or hanging off the back of a truck. Craft sites like Etsy even sell Confederate flag masks and candles. Confederate flags even fly worldwide, as a sign of rebellion, white supremacy, or even just American kitsch. They can be seen in Ireland, Brazil, and Germany, among others.
Yet, many Republicans refuse to support Black Lives Matter. They're being cynical about their base. By refusing to take a stand on racism, they're pandering to the lowest common denominator.
Agree|Info|Expand
Johnny Silvercloud / Shutterstock.com
Only 20% of white Republicans support Black Lives Matter. That number was more than three times higher among white Democrats, with 64% who support Black Lives Matter. The president has frequently made disparaging remarks about the movement. On Twitter, he said that the movement was “a symbol of hate." Other close supporters of the president have echoed those statements. "Black Lives Matter is a Marxist organization," former New York City Major Rudy Giuliani told reporters outside of the White House. "Black Lives Matter has been planning to destroy the police for three years," he added. Right-wing hosts on Fox News, such as Tucker Carlson, frequently criticize Black Lives Matter. Carlson in particular stokes fear amongst white Conservatives, calling the protests a “dangerous moment." This refusal to support Black Lives Matter has devolved into downright antagonism. And that comes at a moment when police violence against people of color continues to go unchecked.
Written by