Officers' function as a crime deterrent is just as important as their function to capture criminals. The data backs this up.
Dec 4, 2020 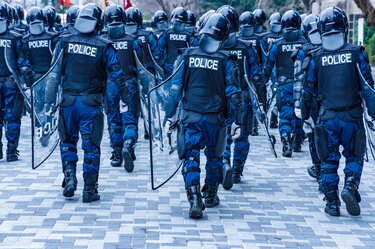 taka4332/Getty Images
Numerous studies have found a correlation between a larger number of police officers on the force and a reduction in violent crime. When it comes to violent crime in major cities, a 2018 article in the Review of Economics and Statistics found that every $1 spent on additional police forces generated $1.63 in social benefits. This conclusion, which used data from multiple cities across 50 years, found that the resulting social benefits were mainly a consequence of reducing murders. Research has also shown that just perception of getting caught by police for certain is a bigger deterrent than any threats of punishment. Given the rates of recidivism, or repeat offenders, prison time does not seem to be a good deterrent in and of itself. Another study—this one from 2005— found that the mere presence of visible police in a public place was enough to deter crime. That is their biggest benefit to society: simply existing. If more police means less crime, then it would stand to reason that the absence of police would encourage those with a propensity to commit crimes to act.
Written by

The End of Policing left me convinced we still need policing