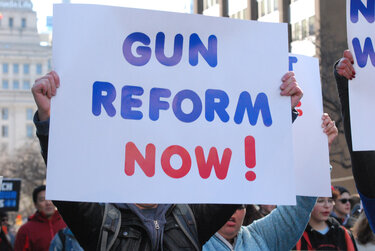 Louis.Roth / Shutterstock.com
Everytown for Gun Safety developed an 8-point plan to protect children and communities from gun violence. That plan includes passing Red Flag laws. They consider them to be a critical intervention tool for preventing violent situations. The gun safety advocacy group sees "extreme risk," or red flag laws, as part of a comprehensive way to reduce or even end gun violence in America. It says "these laws create a legal process by which law enforcement, family members, and, in some states, educators can petition a court to prevent a person from having access to firearms when there is evidence that they are at serious risk of harming themselves or others. Extreme Risk laws are a critical intervention tool that can be used to prevent violent situations." When family or law enforcement are made aware that a student or another person is a risk to themselves or others, and that person has access to guns, they can go to a court and ask a judge for a civil restraining order. These Red Flag orders, commonly known as extreme risk protection orders (ERPOs), can only be issued after a specific legal determination is made that a person poses a threat to themselves or others. Under federal law, people with serious mental illness are not prohibited from owning a gun unless they have been involuntarily, psychiatrically hospitalized or have a court disposition related to mental illness (e.g., not guilty by reason of insanity). ERPOs differ from existing federal and state law because they allow for preventive action in the absence of a civil disposition or criminal conviction. Of course, this is just part of the puzzle for Everytown. The group also advocates for stricter controls on automatic weapons and transport of weapons between states, among other things.
Written by