The artistry, the materials, the labor, the sacrifice, and the endurance bear witness to generations of Parisians.
Dec 4, 2020 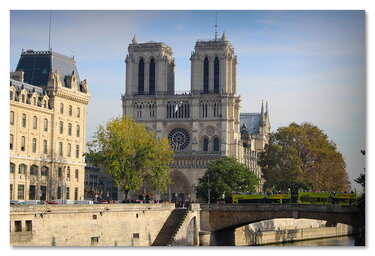 The medieval Catholic cathedral has been part of the Parisian architecture skyline since 1260. It has withstood the French Revolution, Napoleon, World War I, World War II, bombing attempts, and the 2019 fire. The building represents the enduring spirit of centuries of Parisians. It is as much a testament to the artistry involved in the use of flying buttresses to the delicate details in awe-inspiring stained glass windows, as to how the city of Paris continues to thrive. The very architecture was also called "a poor people's book" because of the many sculptures which line its walls and face depicting scenes from the Bible to benefit the illiterate. Some sculptures were destroyed by French revolutionaries, but many remain. The church, meaning "Our Lady" in French, has seen innumerable historic events. It was once the seat of the archbishop, and it served as the location for Henry VI's coronation. It would later inspire Victor Hugo to write "the Hunchback of Notre Dame," in which he referred to the cathedral as a "symphony in stone." Following the 2019 fire, author Summer Brennan wrote: "Notre Dame has borne witness to the rituals of Paris; its markets, its protest and revolutions, its lovers. The cyclops gaze of its rose windows — miraculously spared through this latest disaster — have observed as the days and decades and centuries pass through the hands of the city like prayer beads. Be it magic or art that most animates such a place for you, each share the power to conjure. We are all, sometimes, in need of sanctuary."
Written by

Facts on the Notre Dame Cathedral in France

Rewriting a Symphony in Stone