Abolishing police would leave communities lacking important emergency services. Citizens would be forced to carry out their own rescue work, in addition to criminal investigations.
Dec 4, 2020 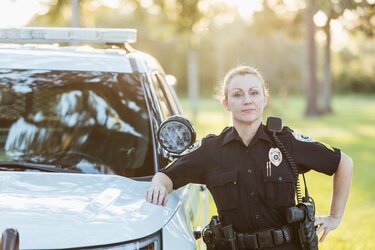 2 reasons
They conduct rescue operations and other community functions. That includes 9-1-1 services and another emergency help. They sometimes carry-out high risk rescue operations, aiding women and children.
Agree|Details|More
JasonDoiy iStock, iStock / Getty Images Plus
Police conduct search and rescue operations in kidnapping cases or when children wander off, do welfare checks on the elderly and mentally ill, and can help remove vulnerable people from situations of domestic violence in their homes. Violent crime is usually defined as homicide, robbery, rape and aggravated assault and actually takes up only a small portion of a police officer's on-shift time. Defunding police would likely lead to more of their other, community-based work taking a hit in addition to putting the community at risk from these violent crimes. Several cities from New Haven, New Orleans, Sacramento, and Seattle have reported that the vast majority of 911 calls involving police have not been violence-related. In fact, only about 4% of a police officer's on duty time is spent involving violent crime. Approximately half of their time is spent responding to non-criminal calls and traffic duty. On a more personal level, police can also do welfare checks on the elderly or disabled members of the community, making them feel less alone and ensuring they are healthy for family members or friends concerned.
They also help foster a sense of community. Their presence can offer a sense of safety. And police officers often serve as role models.
Agree|Details|More
rayjunk / Shutterstock.com
Police officers' presence in communities, at coffee shops and neighborhood stores, and talking to students in schools all add to a sense of safety for parents, children, and members of that community. In the absence of other infrastructure, police can rescue cats from trees, be a mentor to troubled youth, or serve as a deterrent from criminal elements entering a community. Police chiefs often have to play the role of community liaison as well, bridging gaps between law enforcement and citizens to better understand each other. Police and sheriff departments, particularly in underfunded or rural areas, often serve as more than just crime busters. Police officers can be important role models for children in a community by going to speak at schools and teaching them early about the law and what safe communities look like. They can serve as a resource for key administrative functions so City Halls and mayors' offices can focus on other substantive matters.
Written by

How to reform American police, according to experts