Pregnancy Can Be Unfair to Women, and Something Should Be Done About That

It can create a burden that results in more gender disparity—but that inequality can be mitigated.
Dec 4, 2020Updated 2 months ago 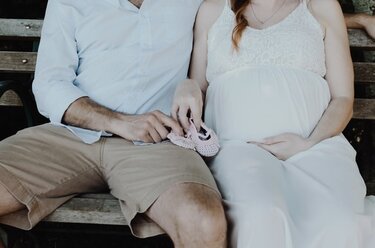 Agree
In other cases of inequality, trying to level the playing field is accepted as reasonable. Making an effort to make the world more equal promotes better opportunities—and increased income—for people who are marginalized in some way.
Physical, genetic, and accidental circumstances help create inequalities. For those affected, these circumstances make life and work more challenging. They can even reduce basic, daily functioning.
Genetic diseases can reduce quality of life and work ability. That can affect someone's mental and physical capacities. It can also put strain on their mental health.
Genetic disorders, for instance, can both reduce a person's quality of life and result in limited work opportunities. Disorders with a genetic component such as autism or ADHD can make it more difficult for employees to work with colleagues or focus on a task. Physical genetic disorders, such as muscular dystrophy, may result in reduced mobility which can affect both manual labor jobs and office jobs (someone with MD, for instance, might not be able to access a building that doesn't meet ADA standards). According to results from the Human Genome project—which sequenced the DNA of thousands of people—there are over 6,000 genetic diseases. Of those, 10 are the most common. Those include cystic fibrosis, Down syndrome, fragile x syndrome, hemophilia, Huntington’s disease, Duchenne’s muscular dystrophy, sickle cell anemia, thalassemia, tay-sachs, and Angelman syndrome. Many of these disorders lead to physical and/or mental challenges. Those can in turn affect both someone’s ability to work and their quality of life.

Agree
Even ordinary accidents can have long-term effects on individual agency. Millions of daily injuries can determine people's future. Even mundane accidents can exert a lifetime of consequences.
Ordinary accidents—from falls to car accidents—can reduce a person's capabilities. Car accidents alone, for instance, are a significant factor. Each year in the U.S., there are about 6 million car accidents. Of those, 2 million drivers will experience permanent injuries as a result. Other types of injuries such as tripping, spraining an ankle, or being injured by a falling object are in fact very common. There are a slew of workplace injuries, from violence between employees to strained muscles that can reduce mobility over time. Depending on the circumstances from the injury, an employee may or may not be eligible for workers' compensation. Victims of accidents may see reduced mobility and a need for extra help for things they once did on their own.

Agree
Military injuries can put people at a disadvantage. Mental trauma and physical injuries are common. Women in particular are subject to sexual trauma as well.
Military injuries—including psychological trauma—are extremely prevalent among the armed forces. The Army describes the problem of military injuries as an "epidemic." According to a recent report, the rate of injury is 2,500 per every 1,000 soldiers. This means that the average American serving in the Army will endure at least two musculoskeletal injuries. This figure includes injuries sustained both on missions and from Army garrisons. As many as 20% of all veterans suffer from post-traumatic stress disorder (PTSD). Persistent flashbacks, moodiness, or anxiety caused by PTSD can prevent veterans from functioning or working normally. Specifically for women, military sexual trauma and other issues can cause permanent damage. Some 23% of female veterans report being sexually assaulted, and 55% report being sexually harassed, according to the Department of Veteran Affairs.

Agree
But there are ways of mitigating inequality. Laws and policies can help marginalized people rise up. They slowly help level the playing field.
IStock.com/PeopleImages
Affirmative action procedures are in place. Both in the private and public sector, these policies look to level disadvantages. Data has shown the effectiveness of these programs.
The United States has an affirmative action policy that must be upheld by all contractors and sub-contractors working on behalf of the federal government. It says that, "affirmative action must be taken by covered employers to recruit and advance qualified minorities, women, persons with disabilities, and covered veterans. Affirmative actions include training programs, outreach efforts, and other positive steps." Other types of affirmative action—both at schools and in private workplaces—work to mitigate the marginalization of people of color, disabled people, and LGBTQ+ people. Affirmative action began under President John F. Kennedy in the 1960s. The idea was that fighting against discrimination was not enough; the government had to actively do something to create a more equal world. Since Kennedy's time, the term has evolved and changed significantly. In the beginning, the task force created by Kennedy was simply charged with the motto: “Don’t just stand there. Do something," according to an article in the New Yorker. In the intervening decades, affirmative action policies have often become more concrete. In 1978, the Supreme Court ruled that quotas for marginalized groups in schools or workplaces were unconstitutional. Rather, today, many companies instead have proactive policies intended to hire staff who are both diverse and qualified.

Agree
U.S. labor laws have been in place for 100 years. This legislation has helped reduce inequality and protect the working population. Labor policies specific to women have existed for nearly as long.
For over the past century, the U.S. has had a labor department, meant to guide policies and legislation for workers. Labor activists in the first decades of the 20th century fought for such rights as sick pay, vacation days, and benefits for injured workers. By the 1930s, the secretary of labor would establish the five-day work week, paving the way for other progressive reforms. The United States Department of Labor has had a Women's Bureau for 100 years. The first law was passed 100 years ago and gave the bureau the right to "formulate standards and policies which shall promote the welfare of wage-earning women, improve their working conditions, increase their efficiency, and advance their opportunities for profitable employment.” During and after the Great Depression, labor protections were hugely expanded, establishing unemployment benefits, social security, and a federal minimum wage. The New Deal was designed primarily by a woman, Secretary of Labor Frances Perkins. The protections established throughout the 20th century were designed to reduce inequalities and to protect workers—of all identities—from being exploited.

Agree
And that can improve the livelihoods of those affected greatly. Both in the short- and long-term, these efforts show major pay-offs. And those effects trickle down through future generations.
IStock.com/vgajic
Better access to education and jobs are the key to higher income and a better quality of life. Increased earnings can enrich future generations. And that kind of wealth starts to level the playing field over time.
The more chances someone has at something, the higher probability they have to learn from mistakes and ultimately become successful at it. Therefore, giving people more opportunities to be hired for a job gives them more chances to eventually succeed. Once they're hired, they can do a good job, work their way up, and continue to earn a great wage. That in turn can create generational wealth, setting up their children and grandchildren to earn more than they did. Affirmative action and labor laws allow people to get a foot in the door to these better opportunities. One study found that U.S. university students admitted based on affirmative action went on to earn a higher salaries thanks to that policy. A similar trend can be seen among people with disabilities. While people who are differently abled remain among the highest groups of the unemployed, studies have measured the positive effects of the passage of the Americans with Disability Act (ADA). While the economic benefits of the ADA require further research, one study found that since 1990 when the ADA was first passed, income poverty among people with disabilities has declined.

Agree
More wealth leads to better health and access to healthcare. Socioeconomic status and well-being are interwoven. Without financial stability, total health is not possible.
Having the time to focus on eating right, reducing stress, and getting exercise gives people an overall better quality of life. Studies have found that a higher income correlates to better overall well-being. Or, as the American Psychological Association puts it: "wealth secures health." That's because having a low income correlates with a lower ability to buy nutritional food, or to have the time or money to exercise. It's also psychological: struggling to make ends meet every month puts a mental strain on people that actually damages their physical health. A whole host of factors can affect someone's socioeconomic class and their resulting health, from their gender and sexual orientation, to their ethnicity. "We've often chosen to focus on either ethnicity or class rather than on the interaction between the two," said Hector F. Myers, PhD, a professor of psychology at the University of California at Los Angeles. "We've become a lot more sophisticated in our thinking recently."