This idea has not been published by the writer yet.

The agreement is an international effort to address climate change generally. But frontline communities need special attention.
This idea has not yet been published by the writer. You cannot agree with an unpublished idea. 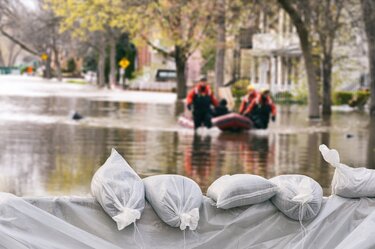 A rescue crew searching a flooded residential area.
9 reasons
Frontline communities are places that experience the impact of climate change sooner and more severely than other areas. These tend to be communities prone to flooding, extreme weather, and rising water levels.
Agree|Info|Expand
The town of Pacific Junction, Iowa was completely submerged in the flood of March 2019.
When it comes to climate change, frontline communities are those that are impacted before anyone else. Environmental organization Ecotrust defined the group as "those that experience the 'first and worst' consequences of climate change". These consequences can range from property damage to loss of income, and into chronic disease. For instance, rising sea levels in coastal towns can disrupt farming, and the melting of glacier ice may overflow local rivers, sometimes damaging homes beyond repair. Frontline communities often consist of low-income, resource-constrained families. These groups are frequently over-represented by Indigenous communities, Latinx, and communities of color. To compound the issue, they tend to be located in places that often lack basic assistance when climate change impacts their lives. Whether that be a low-income urban area or a remote rural area, these individuals often live in locations that have been left behind when it comes to strong infrastructure.
These communities deserve special attention. In the effort to mitigate the effects of climate change, they simply need more support. Not only are these communities affected by climate change more, they often have fewer resources with which to recover.
Agree|Info|Expand
A man walking through flood waters after evacuating his home.
In some cases, the impact on frontline communities is arbitrary, simply due to its close physical proximity to an observable climate change phenomenon. Being born and raised near natural resources such as glaciers, rivers, or oceans—may simply be bad luck given the worsening climate crisis.
Agree|Info|Expand

In other cases, the impact is due to the community having underprivileged constituents with fewer resources. Whether because of redlining or poor infrastructure, sometimes the lack of resources people face during a crisis stems from greater inequalities.
Agree|Info|Expand
For example, African American youth in redlined Baltimore neighborhoods have the highest asthma and heat-related health problems in the country. A lack of resources combined with reduced access to healthcare have led to a spate of chronic breathing issues.
Agree|Info|Expand

Or outside the US, Bangladesh is an example, with its extreme cyclical flooding. This nation is often at the mercy of extreme weather, which has only been worsened by climate change.
Agree|Info|Expand

The rise of low-income housing in floodplain areas has contributed to this phenomenon. Putting under-privileged people in high-risk areas can be disastrous to their livelihood.
Agree|Info|Expand
One research study by the KSCE Journal of Civil Engineering showed that lower-income people are more likely to live in areas that are prone to flooding. When that happens, they often do not have the resources to repair their homes Additionally, many do not have the means to prepare for flooding before it happens or to pay for secondary housing in the event of evacution. The refrain of, "if it's flooding, just move", does not take into account individual's financial means or support systems in other locations that could make moving impossible. In at least one instance in Austin, Texas, the trend of low-income families living in flood-prone areas came as a result of a shift in housing developments. Many floodplains areas were specifically developed for multi-family housing and mobile homes in the period between 1990–2000, making them especially attractive to low-income communities Taken together with the fact that more FEMA aid does not often prioritize low-income areas, this means that frontline communities are often hit harder and take longer to recover.
Meanwhile, available national aid often goes to privileged, predominantly white communities. While frontline communities receive scant federal aid, high-income neighborhoods often receive the bulk of FEMA money.
Agree|Info|Expand
In an investigative report by NPR, it was found that FEMA aid goes more towards rich, white communities than frontline communities. Federal money exacerbated existing inequalities in places like Houston, Texas as the federal government focused on rebuilding wealthier communities. "Federal aid isn't necessarily allocated to those who need it most; it's allocated according to cost-benefit calculations meant to minimize taxpayer risk," NPR's report explained. "Put another way, after a disaster, rich people get richer and poor people get poorer." NPR followed two families following the flooding in Houston: one white and one Black. They found that a year after the disaster, the white family was financially recovered, and the Black family was barely hanging on financially, struggling to get any help from FEMA or other government agencies. For instance, the government has a buyout program to purchase land or homes that are disproportionately at risk for flooding. An analysis found that, of FEMA's 40,000 property buyouts, more than 85 percent were owned by white or non-Hispanic families. Even when frontline communities do receive support, it often doesn't fit well with the specific situation or the people living there. In some situations, well-meaning organizations have visited the impacted community to offer support by raising awareness, but they frequently leave quickly without doing much actual help on-the-ground.
Yet the Paris Accord doesn't give them any. It simply ignores these communities. As a result, the Paris Accord doesn't allocate mitigation funding or adaptation resources to them.
Agree|Info|Expand

CLOSURE
Clearly, more needs to be done than simply rejoining the Paris Agreement. While it is an important first step, the U.S. government can and should do much more at home to combat growing climate issues. And that starts with focusing on frontline communities, who are the first victims if not the hardest hit in this climate crisis.
Written by