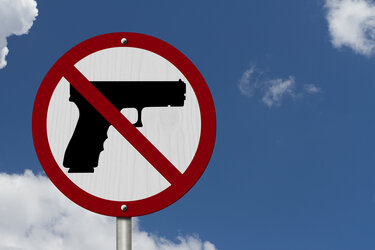 Karen Roach/Shutterstock.com
2 reasons
These laws are a way to act before threats are carried out. There have been many cases of people making threats toward schools involving firearms.
Agree|Info|Expand
wk1003mike/Shutterstock.com
Red flag laws have been passed in 17 states and the District of Columbia. The nonpartisan Violence Prevention Research Program at the University of California at Davis studied more than 20 cases in which California’s red-flag law was used in an effort to prevent a mass shooting by taking away firearms from individuals who presented a threat to themselves and others. The law was invoked in a total of 414 cases in California from 2016 through 2018. No shootings resulted in those cases. Researchers said the study “suggests that this urgent, individualized intervention can play a role in efforts to prevent mass shootings, in health care settings and elsewhere,” according to a report from the Washington Post. They also said it isn't clear whether the attacks would have definitely taken place otherwise, but the evidence proves the red flag laws work at least somewhat. A 2018 study found gun-confiscation measures were associated with a 13.7% drop in the gun-suicide rate in Connecticut and a 7.5% reduction in Indiana. In Maryland, Montgomery County Sheriff Darren Popkin stated that during the first 3 months of the implementation of Red Flag laws, 5 instances involved schools and 4 of those included significant threats.
People who carry out mass shootings often plan their attacks in advance and stockpile weapons. Red Flag laws can help identify them and keep everyone safe.
Agree|Info|Expand
Adam Lanza, the youth that killed 26 people at Sandy Hook Elementary School in 2012, owned seven firearms. Access to firearms, whether in the home or elsewhere, has been a noted warning sign for potential attackers, according to a recent report from the U.S. Secret Service. Evidence has shown that most mass shootings are not impulsive acts, but planned meticulously. That involves procuring and owning firearms, as well as making threats. Stephen Paddock, a 64-year-old man from Mesquite, Nevada, opened fire upon the crowd attending the Route 91 Harvest music festival on the Las Vegas Strip in Nevada. The incident is the deadliest mass shooting committed by an individual in the Western Hemisphere. Paddock was staying at the Mandalay Bay Hotel and with the help of hotel staff brought in 22 suitcases over a number of days. All contained weapons and accessories he owned and stored in his home. If red flag laws and public education about the warning signs had been in place, police could have prevented people like Paddock and Lanza from acquiring weapons and planning their attacks. Both had suspicious behavior leading up to the attacks, as had several attackers according to friends and family interviewed for a study by the U.S. Secret Service, who have proven mass shootings are planned and threats are often made once the person has obtained the firearms they want.
CLOSURE
Several powerful examples from other states show that Red Flag Laws can and do prevent mass shootings—keeping millions of Americans safe.
Written by