The words "no comment" or "I didn't see that tweet" may as well be the mantra of Republican leadership. They can only plead ignorance because his actions can't be defended.
Dec 4, 2020 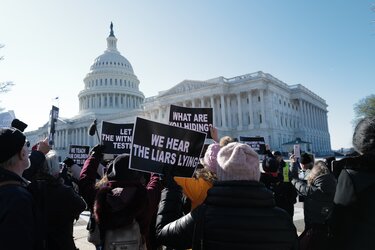 Phil Pasquini / Shutterstock.com
When Trump supporters or Republican leaders are confronted with the facts of what Trump does or says, they quickly unravel. That's because they know much of his behavior is indefensible. Earlier this summer, for instance, Trump tweeted a conspiracy theory about Antifa. The same routine took place as often happens following an outlandish tweet: total denial. "I didn't see [the tweet]," Florida Republican Sen. Marco Rubio said. "You're telling me about it. I don't read Twitter. I only write on it." "I'm not going to comment on the President's tweets," said Texas Sen. John Cornyn. Colorado GOP Sen. Cory Gardner simply said he'd rather not look at it. In June 2020, journalists became so exasperated by the same "I didn't see it" responses that some reporters actually printed out copies of one Trump tweet to show Republicans in Congress. Even that failed. "Faced with documentary evidence of the president’s inflammatory remark, most Republicans averted their gaze on Tuesday, declining to comment as they darted through the hallways of Capitol Hill and appearing to wish away what was on paper in front of them," wrote the New York Times.
Written by

That Trump Tweet? Republicans Prefer Not to See It