This administration's rollbacks of environmental protections are undoing years of vital climate work. And Trump's destruction of the EPA is nothing short of a disaster.
December 4, 2020 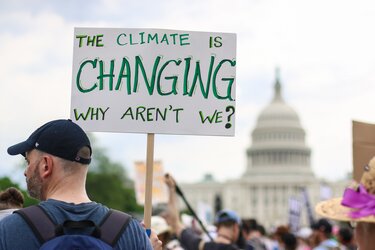 Nicole Glass Photography / Shutterstock.com
Climate change tends to be seen as a Democratic issue—and with good reason. Climate change denial has often fallen along partisan lines. Democrats are three times more likely to see climate change as an urgent issue, according to a recent Pew research poll. Some 90% of Democrats say that the federal government is not doing enough to protect the environment, compared to 39% of Republicans, according to the same poll. Trump in particular has made taking aim at environmental protections a top priority. "[The] Trump administration has dismantled most of the major climate and environmental policies the president promised to undo," wrote the New York Times this summer. Trump's administration has already reversed or is in the process of reversing some 100 Obama-era environmental protections. Those include restrictions on carbon emissions, air pollution, and drilling and extraction. The president claims that the protections were unnecessary and stifled industry. Environmentalists say they were vital in slowing the effects of climate change in the next few years. The destruction of the Environmental Protection Agency (EPA) has been particularly egregious. Trump appointed a former coal lobbyist to head the agency, essentially making it a farce. The effects of these rollbacks could be huge, especially for future generations. They might lead to dirtier water and air, as well as rising sea levels and drought.
Written by

More Americans see climate change as a priority, but Democrats are much more concerned than Republicans