Republicans Supporting Trump Know That Their Position Can't Be Justified

Traditional Republicanism is based on principles such as conservatism and family values. Trump’s personal life, public image—and much of his platform—fly in the face of traditional GOP values.
Oct 5, 2020 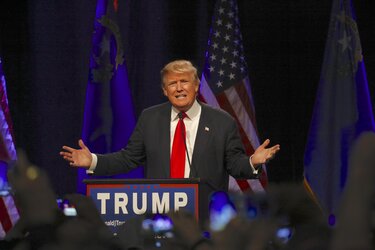 Joseph Sohm / Shutterstock.com
2 reasons
In many ways, Trump's agenda is not traditionally conservative. In both his personal life and his politics, Trump represents a total lack of family values, Christian morality, and good business-sense, all elements that have been crucial to the Republican agenda in the past half-century. And yet, even old-school Republicans have continued to support him.
Agree|Details|More
Benjamin Clapp / Shutterstock.com
Traditional Conservatism in the U.S. has constituted certain core values, such as respect for American traditions, limited government, support for Christian values, moral universalism, strong national defense, and free trade, among other principles. Trump exhibits almost none of those qualities other than a respect for free trade. That dedication likely only comes from his personal experience, supporting a set of free trade policies that have enhanced his personal wealth. When it comes to Christian values and universal morality, Trump can't make a claim to either. If anything, he is one of the most morally relativist politicians at work today. Trump may have grown up attending Norman Vincent Peale's New York City church, but he is not a man of God. Indeed, many Christian Republicans struggled to support the president during his 2016 campaign, citing his apparent lack of religious character. Many only came around after Trump promised to select an anti-abortion Supreme Court justice. Trump's personal life flouts many of the small-town Christian values that Republicans claim to support. He has been divorced twice and married three times. He has been embroiled in many sex scandals, including upwards of two dozen accusations of sexual misconduct. While Trump may support aspects of the Republicans' economic plans, such as tax cuts and free market capitalism, when it comes to the moral, Conservative core of the party, he is very far from the norm.
Republican party leaders will go to lengths to pretend they didn't see Trump's latest screwup. The words "no comment" or "I didn't see that tweet" may as well be the mantra of Republican leadership. They can only plead ignorance because his actions can't be defended.
Agree|Details|More
Phil Pasquini / Shutterstock.com
When Trump supporters or Republican leaders are confronted with the facts of what Trump does or says, they quickly unravel. That's because they know much of his behavior is indefensible. Earlier this summer, for instance, Trump tweeted a conspiracy theory about Antifa. The same routine took place as often happens following an outlandish tweet: total denial. "I didn't see [the tweet]," Florida Republican Sen. Marco Rubio said. "You're telling me about it. I don't read Twitter. I only write on it." "I'm not going to comment on the President's tweets," said Texas Sen. John Cornyn. Colorado GOP Sen. Cory Gardner simply said he'd rather not look at it. In June 2020, journalists became so exasperated by the same "I didn't see it" responses that some reporters actually printed out copies of one Trump tweet to show Republicans in Congress. Even that failed. "Faced with documentary evidence of the president’s inflammatory remark, most Republicans averted their gaze on Tuesday, declining to comment as they darted through the hallways of Capitol Hill and appearing to wish away what was on paper in front of them," wrote the New York Times.
Written by