Rev. Raphael Warnock Will Be Georgia's First Black Senator if He Wins the January 2021 Runoff

There have only been 10 Black senators in US history. None of them came from Georgia.
Jan 6, 2021Updated 18 days ago 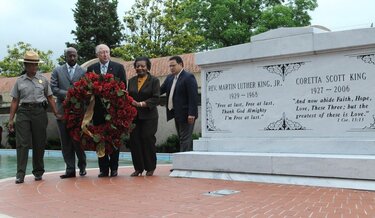 Reverend Raphael Warnock (second from left) is pictured laying a wreath at the gravesite of Dr. Martin Luther King Jr., in 2009.
There has never been a Black winner of a race for the United States Senate in the history of Georgian politics. Since Hiram Revels was elected to the U.S. Senate in 1870, there have only been nine other Black senators. That's a total of 10. Of those, only three were from southern states: two in Mississippi and one in South Carolina. Every Black senator who has run in Georgia has lost. That's two seats up for grabs every six years in elections beginning in 1788 through 2016. Roughly 76 senate elections over 228 years in Georgia and only non-Black winners. A state with 32% of the population being Black and 0% making it into the United States Senate. It's a streak that would be broken if Rev. Raphael Warnock wins.
Written by

I find the Census Bureau, the US Senate, Wikipedia and the NY Times to be reliable for this kind of fact checking
Sources