Roger Goodell Changed His Position on Kneeling After Four Years

They finally changed their view after years of not supporting Black Lives Matter protests. In fact, they panicked so much that the commissioner frantically made a video in support of the movement looking like he just rolled out of bed.
December 4, 2020Updated 2 months ago 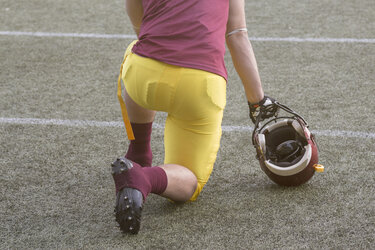 Zoff/Shutterstock.com
2 reasons
In 2016 Roger Goodell, commissioner of the NFL, was not supportive of the players' right to take a knee during the national anthem. He claimed the protests disrespected the armed forces. Goodell argued that taking a knee was unpatriotic.
Agree|Info|Expand
League commissioner Roger Goodell
Responding to the dispute in September 2016 over whether Colin Kaepernick and other players should be permitted to take a knee during the national anthem, Roger Goodell made an ambiguous statement, but it was one that did not openly support Kaepernick. In it, Goodell said he appreciated the fact that players had a public platform. He also said that they have the right to "want to see change in society." At the same time, he made it somewhat clear that he didn't agree with the tactic. Goodell hinted that the protest was disrespectful to patriotic sentiment. "I think it's important to have respect for our country, for our flag, for the people who make our country better; for law enforcement, and for our military who are out fighting for our freedoms and our ideals," he said. "These are all important things for us, and that moment is a very important moment. So, I don't necessarily agree with what he is doing."
But in 2020, he came around. After a nationwide uproar over police killings, he announced his support. He even rushed out a poorly produced video supporting Black Lives Matter.
Agree|Info|Expand
A screenshot from Goodell's 2020 video
In a video released by Goodell in June 2020, he announced a shift in his view on the peaceful kneeling protest during the national anthem. "We, the National Football League, condemn racism and the systematic oppression of Black people. We, the National Football League, admit we were wrong for not listening to NFL players earlier, and encourage all to speak out and peacefully protest. We, the National Football League, believe Black lives matter," he said. In the video posted to Instagram, he went on to give his condolences to the families of Black people murdered in racially-motivated incidents. He included the names of George Floyd, Breonna Taylor, and Ahmaud Arbery, as well as "all the families who have endured police brutality."
CLOSURE
It would take a full four years for Goodell to change his mind. And it only happened after nationwide—and sometimes violent—protests.
Written by