A business's "entity type" is its legal structure. For ages, states have offered entity types such as sole proprietorship, LLC, LP, and corporation. But now, many are also offering social enterprise-based ones, such as public benefit corporation and social purpose corporation.
Aug 13, 2021Updated 2 months ago 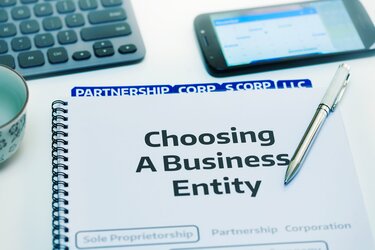 Shutterstock/Marlon Lopez MMG1 Design
The very foundation of a business—its entity type—has shifted in the 21st century. "Entity type" means the category of company that is available from a particular state (e.g., LLC, LP, Corporation, etc.). Where businesses once had only a few for-profit types, now there are a number of new ones that cater to the sustainability movement. The history of these entity types began relatively recently, but they have quickly flourished. In the U.S., new entity types—such as Benefit LLCs, Social Purpose Corporations, and Public Benefit Corporations—have sprung up around the country. They surfaced for the first time around 2010, but now there are upwards of 40 states that support them. Although the history of these entities is short, the very fact that so many states find the concept important enough to create multiple options speaks to the need that they're filling in the marketplace. Regulations vary based on state and entity type, but essentially a business can file incorporation documents selecting one of these sustainability-oriented choices. That means confirming the entity type in the charter or other founding documents. Moreover, within its statement of purpose, the business usually must state specifically how and where the company will benefit the public. Some common public benefits include promoting economic opportunity, promoting arts and sciences, creating jobs, or improving local health. The new entity types vary slightly state-to-state, but one of the most popular is Public Benefit Corporation (PBC), which is recognized in 41 states and Puerto Rico. It is required to serve a specific public benefit (or benefits). It must also define and give examples of those benefits while voluntarily meeting higher standards of accountability than other for-profit corporations. In many states, that means passing a third-party assessment. A lesser-known entity type that is slowly building momentum is social purpose corporations (SPC). These began to emerge about ten years ago. An SPC is more flexible than a benefit corporation because it is not required to be specific about how it benefits the community. It also does not have to meet and pass third-party assessments. Most states use some version of the Model Benefit Corporation Act, legislation that was drafted by the non-profit organization B-Lab. The Model Act that has been applied by many states is interesting, because it brings some performance standards to the PBC-designation, rather than just leaving it to potentially be a "paper tiger." That includes requiring companies to specify how they benefit the community and measuring those benefits over time. Delaware has diverged in its approach, with its Public Benefit Corporation Act, not based on the Model Act. This difference is notable, because on the one hand, Delaware is the most popular state for companies to incorporate, but on the other hand, it imposes fewer requirements on PBCs. For instance, PBCs in Delaware are not required to have a specific public benefit, nor are they required to be measured by a third-party standard. The success of these new entity types is unfolding before us—but clearly a lot of attention is being, and will likely continue to be, paid to this new, corporate format.
Written by

Benefit Corporations and Beyond

Your benefit corporation options: Should you incorporate in Delaware or elsewhere?