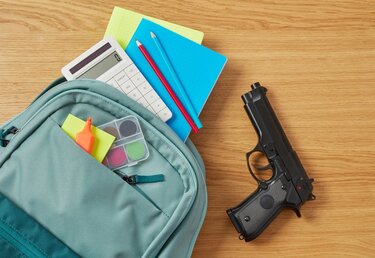 Goir/ iStock / Getty Images Plus
The United States Secret Service and the United States Department of Education studied targeted school violence incidents and found behavioral warning signs that caused others to be concerned in 93% of cases. The Secret Service National Threat Assessment Center studied 41 school attacks from 2008 to 2017 and found that none of the school shootings were impulsive acts and all of them could have likely been prevented. The study found most of the weapons students used came from their home, many of the shooters were absent from school in the days prior to the shooting because they were suspended due to bad behavior, the disgruntled students were often treated poorly and teased by classmates in person and online, and some of the students exhibit mental health disorders and/or were suicidal. More than 75% of the attacks were in response to some sort of incident between the shooter and another student. More than half the attacks also involved the shooter and a gripe with a school administrator, however.
Written by

I looked over the report and the analysis was thorough
Sources