The All Lives Matter Slogan Was Acceptable For a Long Time

That slogan was widespread throughout the United States. Even the vice president used it.
December 4, 2020 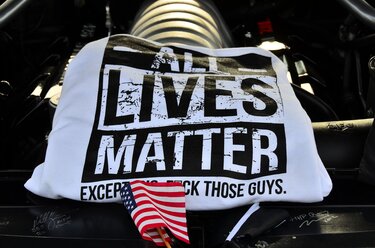 Among certain groups of Americans, saying "all lives matter," or being actively against the Black Lives Matter movement was still acceptable. As recently as June of this year, Vice President Mike Pence refused to say "black lives matter." Instead, he repeated again in a TV interview: "I really believe that all lives matter." "All lives matter" might seem like an innocuous term, but its meaning is ignorant at best and racist at worst. Activists have often used the metaphor of a house on fire: if a neighbor's house is on fire, there's no sense in saying "All houses matter" and spraying water on the house that is not on fire. "No one's saying that your life doesn't matter," blogger Ayanna Lage told CBS news. "What we're saying… is all lives can't matter until black lives matter."
Written by