The Egyptian Pyramids Were Notable for their Architectural Feat

Their existence represents both the rulers who commissioned them and the laborers who strained to build them.
Dec 4, 2020 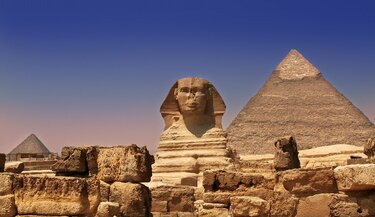 The 130 or so pyramids were built as tombs and mausoleums for the region's royal families, the oldest of which was built around 2600 BC. How these massive structures were constructed with no modern machinery, in the middle of a desert, largely remains a mystery, though some recently discovered evidence suggests an ingenious use of pulley and ramp systems. The shape of the pyramids itself is a testament to the visionary thinking of their architects. Some think the pyramid shape mimics the rays of sun, shining down upon the earth. Pyramids were often finished off with limestone on their faces so they could be visible across the desert. The pyramids were a symbol of the pharaohs' power at the time, with many revered as demigods. But, the structures themselves also stand as a testament to the generations of laborers who toiled to build them, many of them slaves. The pyramids are now inscribed in UNESCO's list of top world heritage sites for their cultural significance. They are also considered one of the original "seven wonders of the world." The authenticity and enduring integrity of the work after centuries is part of what makes them so special. UNESCO called the Great Pyramid of Giza "the only surviving wonder of the ancient world." They pyramids are important not only for their aesthetic and architectural beauty but for their historical significance. Even today, historians are still learning new things about ancient Egypt by studying the pyramids.
Written by

Memphis and its Necropolis – the Pyramid Fields from Giza to Dahshur