Because the Senate majority will be determined by who wins, the fate of American partisanship hangs in the balance.
December 6, 2020Updated 3 months ago 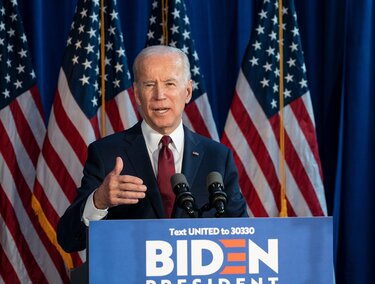 lev radin / Shutterstock.com
2 Reasons
The election could affect the transition to a Biden White House as well as have long-ranging affects on policy long after Biden's term. Depending on who prevails in Georgia's runoff, the incoming Senate could potentially prioritize questions about the legitimacy of the 2020 presidential election results rather than prioritizing legislation related to Biden's platform. The consequences of the runoff could also impact legislation far beyond Biden's term.
Agree|Info|Expand
Stratos Brilakis / Shutterstock.com
Both Republicans in the Georgia runoff are aligned with Trump. If they prevail in January, they may stand with fellow Senate Republicans in backing Trump's claims that the 2020 election results were unfair or inaccurate. That may lead to a refusal to acknowledge Biden's presidency and a continuation of denying Trump's loss. This could result in unprecedented refusals to convene, legislate, and vote as a legislative body. A Republican-majority Senate may call for investigations into Trump’s claims of voter fraud and election irregularities. This could have an immediate impact on Americans who depend on Senate legislation regarding COVID-19 and other urgent priorities. However, if one or both of Georgia's Senate seats are won by the Democratic contenders, the incoming Senate might shoot down Republican attempts to prioritize investigation of the presidential election results. A federal appeals court has already dismissed Trump's lawyers allegations of voter fraud in Pennsylvania, citing a lack of evidence. These two Senate seats could also make a huge difference in what President-Elect Joe Biden can accomplish once he takes office. His ability to carry out campaign promises and get Cabinet picks confirmed will be impacted. And the political composition of the U.S. Senate could impact the nation’s laws, not just during Biden’s one or two terms, but thereafter — especially in terms of actions such as SCOTUS confirmations and proposing to revisit decisions such as Roe v. Wade or controversial legislation such as the Affordable Care Act.
How Georgia votes will decide the balance of power in American politics. Whoever wins the Georgia seats will determine who holds the reins of power in the Senate at least through the 2022 midterms and possibly longer. With a Democratic executive branch, a Democratic U.S. House of Representatives, and a Democratic Senate, the rule of law would be largely Democrat.
Agree|Info|Expand
Vladimir Cetinski/Getty Images
These two Senate races in Georgia will either tilt the scales of power toward the Democrat or the Republican parties—in a way that will reverberate throughout the American political system. There are two possible scenarios: First, the Republican Party already has 50 seats out of the Senate's total 100. If the Republicans can win one or both of the Senate seats in Georgia, they will remain the majority party, and Sen. Mitch McConnell will keep his position as majority party leader. Republicans say this outcome would provide much-needed checks and balances on a Democratic White House and a majority-Democrat House of Representatives. Democrats, however, fear that a Republican majority in the Senate could effectively block important legislation and create government gridlock. The second scenario is this: If both Democrats win, the Senate will be evenly split between the two parties. In this case, tie-breaking votes go to the Vice President—former Democratic Senator and Vice President-Elect Kamala Harris—effectively turning the Senate blue. In that case, both the House, Senate, and the White House would be Democratic, a scenario that Democrats say will allow them to carry out COVID-19 relief packages and other legislation. Republicans fear there would not be enough room for dissent if this were the case. The balance of power determined by the Georgia runoff will also affect Senate's long-held tradition of filibustering. If both Democrats win in Georgia, they could effectively end the Republicans' ability to use majority rule to end debate on legislation while making Biden's legislation more filibuster-proof. However, if one or both of the Republicans win the Georgia runoff and the GOP maintains its Senate majority, Democrats' efforts will remain vulnerable to Republican filibuster.
CLOSURE
The balance of power—not just between the two ruling parties but between the very branches of government—is what is at stake in this election.
Written by