The Power of the Black Vote Has Been Evidenced in Recent, High-profile Instances 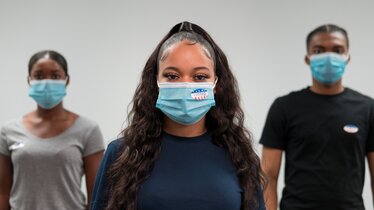 FatCamera/Getty Images
2 reasons
Long-term data shows that Black Americans (and Black women in particular) vote Democrat. Their votes have proved vital in southern states such as Alabama. And they're becoming an even more important voting bloc as the number of eligible nonwhite voters steadily drops.
Agree|Info|Expand
Robert P. Alvarez / Shutterstock.com
National exit polls and voting data show nonwhite voters strongly trend Democratic and that they are turning out in record numbers. Since 2000, the number of eligible nonwhite voters has dropped in all 50 states, with 10 states seeing a double-digit drop, according to the Pew Research Center. In battleground states in particular, nonwhite voters are becoming increasingly crucial in tight elections. In Arizona, for instance, nearly one out of four eligible voters is Latino, according to the same Pew report. In 2017, Black women voters were the force behind electing the first Democratic U.S. senator from Alabama in a quarter of a century. Black voters were also responsible for Biden’s lead in states that ended up giving Biden his win, such as Nevada and Pennsylvania.
Black voting rights advocates such as Stacey Abrams have proved crucial in rallying black voters. People of color have been working nonstop to mobilize their communities for years now. And their efforts are paying off, swaying elections for the Democratic Party.
Agree|Info|Expand
Albert H. Teich / Shutterstock.com
Thanks to the efforts of activists and politicians—such as Stacey Abrams, who has worked tirelessly to create a diverse, multiracial coalition of Democratic voters—Georgia was able to turn blue in 2020, a once-elusive victory in the deep South. And she's not the only one. Abrams's organization, Fair Fight, was founded in 2018 to combat voter fraud in Georgia. That group extends far beyond Abrams's efforts alone. Fair Fight has been able to register thousands of eligible voters and ensure that their ballots are counted. "Efforts to discourage and disenfranchise voters—in voter registration, ballot access, or counting of votes—have a catastrophic effect on our democracy and our communities," wrote Fair Fight, adding, "The facts and faces of voters from the 2018 election in Georgia convey the insidious design and pervasive impact of voter suppression."
CLOSURE
Black people are becoming increasingly enfranchised—and they overwhelmingly vote Democrat, meaning they are an asset waiting to be utilized by the Democratic Party.
Written by