The Process of Giving Birth Is Long, Uncomfortable, and Frightening

It can last as long as several days. For some women who don't encounter serious complications, the pain and suffering of childbirth can be traumatic, lasting over the course of several days. Even in the case of deliveries deemed normal, women may require stitches, months of recovery, and even reconstructive surgery.
December 4, 2020Updated 1 month ago 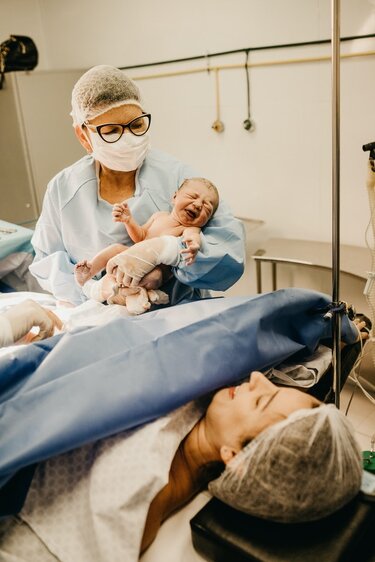 Cases of difficult labor are not out of the norm—on the contrary, they are incredibly common. Some women are in labor for multiple days before they give birth, only sleeping for a few minutes between contractions and chewing ice chips to stay hydrated. Even a natural birth without complications can involve excruciating pain and last for hours. For first-time mothers especially, the process tends to be extremely long and can involve intense pain even with medication. The first stage of labor, or early labor, involves contractions coming every 5–30 minutes. Many women describe the contractions feeling like intense menstrual cramps that can last up to 60 seconds. Some women say even the early contractions are far more painful than cramps, however. “I was told it would feel like very bad menstrual cramps, but that's not what it felt like to me. It was much more intense and it was almost all in my lower back. Every time a contraction would come, my lower back would slowly begin to seize up. It was kind of like the muscles inside were slowly twisting harder and harder until it became almost unbearable, and then it would slowly subside," one woman told Parents magazine. The second stage is active labor, where contractions come every 2–5 minutes and can be more intense and lasting longer. This phase can last upwards of eight hours. The average first-time mother spends upwards of six hours in active labor, according to a recent federal study. From there is delivery, when the cervix is dilated 10 centimeters. This is when a woman starts to actively push to deliver the child. It can last as short as a few minutes or take several hours of excruciating pain. “Pushing was the worst. I could feel every stretch, pull, and tear. The burning was like no other. I remember feeling there was no way I could push the baby out, it won't fit,” one woman told Parents magazine.
Written by

First Baby: What to Expect