There Are Ways of Mitigating Inequality 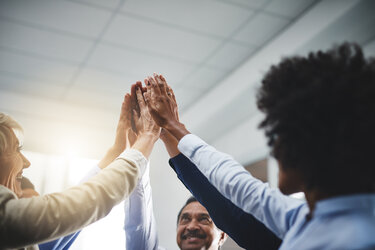 IStock.com/PeopleImages
2 reasons
Affirmative action procedures are in place. Both in the private and public sector, these policies look to level disadvantages. Data has shown the effectiveness of these programs.
The United States has an affirmative action policy that must be upheld by all contractors and sub-contractors working on behalf of the federal government. It says that, "affirmative action must be taken by covered employers to recruit and advance qualified minorities, women, persons with disabilities, and covered veterans. Affirmative actions include training programs, outreach efforts, and other positive steps." Other types of affirmative action—both at schools and in private workplaces—work to mitigate the marginalization of people of color, disabled people, and LGBTQ+ people. Affirmative action began under President John F. Kennedy in the 1960s. The idea was that fighting against discrimination was not enough; the government had to actively do something to create a more equal world. Since Kennedy's time, the term has evolved and changed significantly. In the beginning, the task force created by Kennedy was simply charged with the motto: “Don’t just stand there. Do something," according to an article in the New Yorker. In the intervening decades, affirmative action policies have often become more concrete. In 1978, the Supreme Court ruled that quotas for marginalized groups in schools or workplaces were unconstitutional. Rather, today, many companies instead have proactive policies intended to hire staff who are both diverse and qualified.

Agree
U.S. labor laws have been in place for 100 years. This legislation has helped reduce inequality and protect the working population. Labor policies specific to women have existed for nearly as long.
For over the past century, the U.S. has had a labor department, meant to guide policies and legislation for workers. Labor activists in the first decades of the 20th century fought for such rights as sick pay, vacation days, and benefits for injured workers. By the 1930s, the secretary of labor would establish the five-day work week, paving the way for other progressive reforms. The United States Department of Labor has had a Women's Bureau for 100 years. The first law was passed 100 years ago and gave the bureau the right to "formulate standards and policies which shall promote the welfare of wage-earning women, improve their working conditions, increase their efficiency, and advance their opportunities for profitable employment.” During and after the Great Depression, labor protections were hugely expanded, establishing unemployment benefits, social security, and a federal minimum wage. The New Deal was designed primarily by a woman, Secretary of Labor Frances Perkins. The protections established throughout the 20th century were designed to reduce inequalities and to protect workers—of all identities—from being exploited.