There Was a Ton of Conversation About the Colin Kaepernick Protests

When Kaepernick began kneeling at NFL games as a gesture in support of Black Lives Matter, both the media and the league itself discussed the protest at length for months on end. There were dozens of articles that came out in the first few days alone after he first began his protest. Whether in interviews or through other media, the nation as a whole discussed this at length.
December 4, 2020Updated 4 days ago 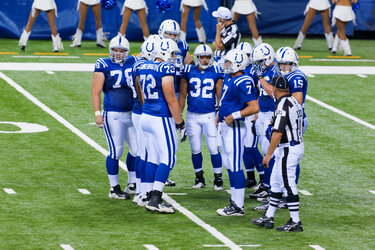 Alexey Stiop / Shutterstock.com
2 Reasons
The owners talked extensively about it. The discussion among the NFL went on for months. There was even a league-wide summit on it. In that summit, the owners spoke with executives and players to reckon with the meaning of the protests. The summit even included insight from some of Kaepernick's closest confidants.
Agree|Info|Expand
Ken Durden / Shutterstock.com
Goodell organized a summit in 2018 in which 30 of the top owners, players, and league executives got together to discuss the kneeling protests. The three-hour, closed-door meeting was a rare opportunity for players and owners to meet and discuss the topic together. In the meeting, Eric Reid—Kaepernick's former teammate and the first NFL player to join his protest—said he felt the league had "hung [Kaepernick] out to dry." According to the New York Times, he added: “Nobody stepped up and said we support Colin’s right to do this. We all let him become Public Enemy No. 1 in this country, and he still doesn’t have a job.” The owners, for their part, were more concerned that continued ire from President Donald Trump over the protests was becoming a black mark on the NFL. The Eagles owner, Jeffrey Lurie, warned against being "baited" by Trump, saying the NFL needed to present a united front. During the course of that meeting, Goodell would have been able to hear from all sides of the discourse in order to understand what the protest was all about.
And there were an inordinate number of news articles about it. Coverage appeared in nearly every major news outlet, ranging from conservative to liberal. Especially in the weeks following Kaepernick's first protest, the articles were nearly non-stop. One major newspaper published more than two dozen articles in the first two weeks alone.
Agree|Info|Expand
Discussion of Kaepernick's protest appeared in nearly every major news outlet, from the New York Times to the Wall Street Journal to cable news networks. For example, the New York Times published 27 articles in the two weeks (Aug. 30—Sept. 12) following the initial incident. Similarly, The Wall Street Journal published the article, "Sixteen Thoughts on Colin Kaepernick" Sept. 7, 2016 discussing the issue. The NFL's own media outlet conducted an exclusive interview with Kaepernick in which he explained his position, immediately after the game Aug. 26, 2016 when he took a knee. What's more, the media discussion lasted for years. The articles and stories have not stopped since Kaepernick first kneeled in 2016.
CLOSURE
It was almost impossible to avoid conversation around Colin Kapernick's decision to take a knee. The media, the NFL teams, and league leadership were abuzz with the protest—meaning that Goodell could have easily learned the nature of the demonstration.
Written by