After the journalist's murder, Trump helped cover up for the Saudi prince. Trump even bragged about saving his "ass."
December 4, 2020 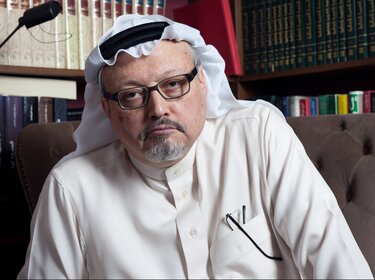 Hany Musallam / Shutterstock.com
Jamal Khashoggi, a Washington Post columnist and managing editor of Al Arab News, went into the Saudi Arabian Embassy in Istanbul, Turkey on October 2, 2018. Khashoggi never made it out of the Embassy alive. His body was later discovered to have been dismembered. The journalist had often written critically of the Saudi government and particularly about Crown Prince Mohammed bin Salman, also known as by his initials MBS. Fearing for his life, he left Saudi Arabia and was living in the U.S. at the time of his death. He had gone to the embassy only to obtain paperwork in order to marry his fiancée, who was doing her PhD in Istanbul at the time. Worldwide criticism of MBS and Saudi Arabia was swift, except for people like Donald Trump. The U.S. president told journalist Bob Woodward for his latest book, titled 'Rage,' that he "saved [MBS'] ass" from the ire of Congress and others. Trump and other senior officials have repeatedly said they believed MBS when the prince said he did not have Khashoggi killed, despite the U.S. intelligence community indicating otherwise. Congress wanted to stop supporting Saudi Arabia in its horrific war against Yemen and to block weapons sales to Saudi government. However, the Trump administration circumvented Congress to involve MBS in a deal to sell $8.1 billion worth of weapons within months of Khashoggi's murder.
Written by