Childbirth Can Be Long, Painful, and Dangerous

It is one of the most challenging experiences women go through, and especially for women with preexisting medical conditions—it can cost them their life.
Dec 4, 2020 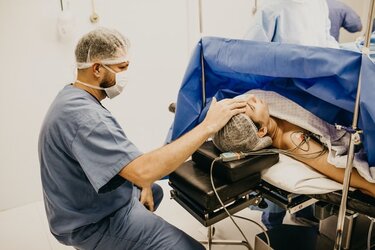 2 reasons
The process itself is long, uncomfortable, and frightening. It can last as long as several days.
For every story of easy child labor, there are ten horror stories to counteract it. Some women are in labor for multiple days before they give birth, only sleeping for a few minutes between contractions and chewing ice chips to stay hydrated. Even a natural birth without complications can involve excruciating pain and last for hours. For first-time mothers especially, the process tends to be extremely long and can involve intense pain even with medication. The first stage of labor, or early labor, involves contractions coming every 5–30 minutes. Many women describe the contractions feeling like intense menstrual cramps that can last up to 60 seconds. Some women say even the early contractions are far more painful than cramps, however. “I was told it would feel like very bad menstrual cramps, but that's not what it felt like to me. It was much more intense and it was almost all in my lower back. Every time a contraction would come, my lower back would slowly begin to seize up. It was kind of like the muscles inside were slowly twisting harder and harder until it became almost unbearable, and then it would slowly subside," one woman told Parents magazine. The second stage is active labor, where contractions come every 2–5 minutes and can be more intense and lasting longer. This phase can last upwards of eight hours. The average first-time mother spends upwards of six hours in active labor, according to a recent federal study. From there is delivery, when the cervix is dilated 10 centimeters. This is when a woman starts to actively push to deliver the child. It can last as short as a few minutes or take several hours of excruciating pain. “Pushing was the worst. I could feel every stretch, pull, and tear. The burning was like no other. I remember feeling there was no way I could push the baby out, it won't fit,” one woman told Parents magazine.

Agree
Complications during childbirth can be life-threatening or debilitating Occurrences of serious complications during childbirth are rising in the U.S. and can threaten the lives of both mother and child.
Bacteria that are typically active in the vagina before pregnancy can cause an infection in open wounds after a mother delivers her baby. This bacteria can affect the uterus and areas around the uterus. There is typically a low chance of developing these infections unless the woman is young and there is an unscheduled cesarean, or a long delivery with excessive bleeding. About one in three women deliver their babies via C-section. Of those women, as many as 18% will go on to develop chronic pain from the scar tissue resulting from that surgery. One young mother lost nearly half her body's blood during her c-section. After a week in the hospital, she thought the worst was over, but she went on to develop chronic pain around the scar tissue where the incision was made. Common complications during childbirth include perineal tears (when the area between the vagina and the anus tears or is surgically cut), excessive bleeding, perinatal asphyxia (when the child does not get enough oxygen), and abnormal heart rate of the baby. Many of these conditions also go unmonitored after childbirth because women are so focused on their child's health that they neglect their own. One study found that as many as 40% of women don't go to their own doctor's appointment check-up after giving birth. Kristen Terlizzi, who cofounded the National Accreta Foundation, had her uterus, appendix, and part of her bladder removed in 2014 because of a life-threatening placenta condition. “There’s this misconception that these complications are rare,” she told ProPublica. “And we [women] get brushed off — ‘The risk is not a big deal.’ But it is.” A 2017 investigation from ProPublica found that serious complications during childbirth in the U.S. were "skyrocketing." More than 50,000 women suffer severe complications each year—a number that has doubled since the 1990s. Women who survive severe complications often deal with long-term consequences such as severe pain, the inability to give birth again, and intense trauma. Emergency hysterectomies, for instance, have risen 60%. Not only is a hysterectomy an invasive surgery with a potentially long recovery time, but it renders women unable to get pregnant again. In 2014 alone, doctors in the U.S. had to carry out 4,000 emergency hysterectomies.