Despite Sexual Assault Allegations Against Donald Trump, Republicans Are Unwavering in their Support of Him

Even after more than two dozen women came forward, alleging crimes ranging from groping to rape—Republicans refuse to believe the victims, instead choosing to continue to support the president.
Dec 4, 2020 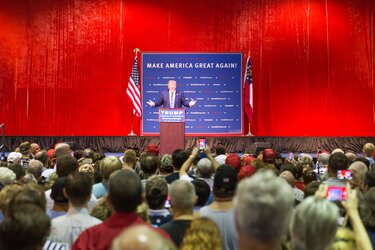 olya_steckel/Getty Images
More than two dozen women have accused Trump of sexual misconduct since the 1970s. The accusations range from sexual harassment to rape and date all the way back to the start of his career. The latest alleged victim came forward as recently as September 2020, a former model who accused Trump of groping her outside a bathroom in 1997. "He just shoved his tongue down my throat and I was pushing him off. And that's when the grip became tighter and his hands were very gropey and all over my butt, my breasts, my back, everything," she told the Guardian. Trump has categorically denied all of the allegations made against him. Concerning this most recent case, his lawyer called the story "totally false." "We will consider every legal means available to hold The Guardian accountable for its malicious publication of this unsubstantiated story," she said. Republican leadership has alternately ignored and justified Trump in these situations. First, for the ignoring: Republican representatives' refrain of "I haven't read that article" or "I haven't heard of that allegation" have become commonplace. Others have openly supported Trump. After columnist Jean E. Carroll accused Trump of rape, Sen. Thom Tillis of North Carolina said “Quite honestly, as somebody who had a front-row seat to the Kavanaugh hearings, we’ve seen allegations that were false...We’ll let the facts go where they are, but I take [Trump’s] statement at face value.” “The accuser and the accused need to be treated with respect and they each need to be afforded due process. Just because you’re accused of something in America doesn’t mean you’re guilty," another Republican senator said at the time.
Written by

The 26 women who have accused Trump of sexual misconduct

'I believe the president': GOP stands by Trump on sexual assault allegation