Trump spoke ill both of John McCain and of the Khan family. In belittling their sacrifices, Trump dishonored all veterans—despite never having served in the armed forces himself.
December 4, 2020 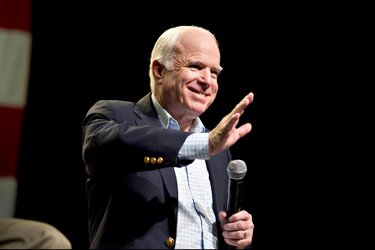 Christopher Halloran / Shutterstock.com
At various times throughout his campaign and first term, Trump disrespected the sacrifices made by both veterans and their families. In 2015, during the presidential campaign, Trump enraged many by disparaging the record of veteran Senator John McCain. McCain served in the Vietnam war and was captured as a prisoner of war. He would spend nearly six years as a prisoner in North Vietnam, much of it in solitary confinement. In that time he was tortured and frequently left in filthy conditions. Trump summed up McCain's service by saying: "I like people who weren't captured." The comment drew ire from thousands of Americans, both in and out of the service. Trump, who never served in the armed forces, again denigrated a veteran family. After the parents of a slain Muslim solider spoke out against Trump's proposed ban on Muslim immigration to the U.S., Trump made a crack at them on television. "If you look at his wife, she was standing there. She had nothing to say. She probably — maybe she wasn't allowed to have anything to say. You tell me," he said to ABC News. While both comments drew ire from Republicans at the time, they have continued to support Trump in spite of his long record of disrespect.
Written by

Heard him on TV saying this
Sources

Donald Trump to Father of Fallen Soldier: 'I've Made a Lot of Sacrifices'