The right to vote is a cherished freedom that can make major changes in American society at large. But voting alone can't end inequalities. Not only is it limited by the political climate at any given moment; elections are only one piece of a much larger picture when it comes to combatting broader discrimination.
December 4, 2020Updated 2 months ago 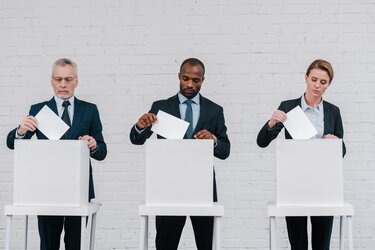 LightField Studios/Shutterstock.com
The rallying cry to "go vote," imparting the necessity of participating in elections, grows louder during every major campaign. Politicians talk about how "every vote counts," or how "one vote can make a difference." But that isn't always the case. In presidential elections, for instance, because of the electoral college, individual votes often matter very little in certain states. And the ability of a single politician or a handful of legislators to make a difference can be limited. Even well-meaning, motivated politicians often fail to make long-lasting change. For instance, the widely-supported Equal Rights Amendment was proposed in the 1920s. Since then, it languished in Congress, only being ratified by the House of Representatives and the Senate in 1972. It still has yet to be added to the Constitution as it has failed to garner a majority of the states needed to ratify it. Even this simple legislation, aimed at preventing discrimination on the basis of sex, has failed to make it into the Constitution after nearly a century. Legislators of course have some power to make more just and equal laws, but they are often faced by these internal slowdowns. They also have to deal with the checks and balances that exist within the political system and can slow down change. As one journalist wrote for the Boston Review, "without pressure from social movements, [elections] won’t produce meaningful and deeply needed reform."
Written by

What Can Elections Do?