Inaction by Politicians on Gun Reform is Harming Children

Their failure to address the root causes of school gun violence is having lasting consequences for millions of American children.
Dec 4, 2020 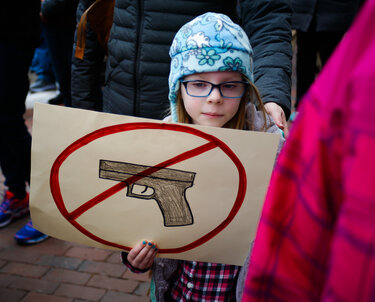 Portsmouth, New Hampshire: March 24,2018: A young girl holds a sing saying “no guns” at the March for our Lives” rally. School shootings don’t just affect the victims. They affect everyone.Arthur Villator / Shutterstock.com
2 reasons
We're hurting our children without these laws in place. Their mental and emotional health is also at risk without red flag laws.
It's important to remember that victims of mass shootings are not limited to the dead or physically injured. Children can't often verbalize the emotional trauma of surviving a shooting but it does affect them mentally and emotionally. In “Mitigating the Effects of Gun Violence on Children and Youth,” James Garbarino and his colleagues point out that “children exposed to gun violence may experience negative short and long-term psychological effects, including anger, withdrawal, post-traumatic stress, and desensitization to violence.” According to the Child Welfare League of America, the effects of gun violence on children is "very real...children and youth exposed to chronic trauma can experience inhibited brain development, producing a lasting impact on life outcomes." According to Dr. Jean Kim of George Washington University medical school. “mass shootings are a first-line traumatic event that can potentially trigger post-traumatic stress disorder (PTSD)...Children, in particular, are even more vulnerable; multiple studies have shown that childhood trauma has more lifelong and pervasive effects on young developing psyches, both in terms of their psychological worldview, and their physiological systems that handle stress and anxiety." Gun violence can put children at risk of developing anxiety and a host of mood disorders as well, often signs of post-traumatic stress disorder.

Agree
And it affects some more than others. It can have a negative impact on future behavior.
Backpack and sign on ground at March for Life protestSvineyard/Shutterstock
A 2002 study says that, "Certain children may be at higher risk for negative outcomes if they are exposed to gun violence. Groups at risk include children injured in gun violence, those who witness violent acts at close proximity, those exposed to high levels of violence in their communities or schools, and those exposed to violent media." More than 215,000 American students have been exposed to some sort of gun violence as a result of a slew of school shootings. This does not include the thousands who have come in contact with gun violence outside of school. Medical costs for pediatric gun-related injuries costs approximately $330 million a year, according to a study published in the Hospital Pediatrics journal. This does not include the cost of ongoing treatments for physical injuries or mental health treatments for psychological damage.