And that terror only seemed to mount in the months leading up to his disappearance.
December 4, 2020Updated 2 months ago 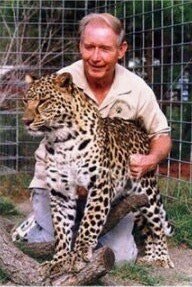 Don Lewis pictured before his disappearance
2 reasons
Just weeks before he disappeared, he filed a request for a restraining order against Carole. That request was denied.
Agree|Info|Expand
On June 12, 1997, Don Lewis filed a restraining order against Carole Baskin. Lewis claimed that Baskin had threatened to kill him. He also said that she had hidden his gun. Baskin dismissed the idea that her husband actually believed he was in danger. She claims he just feared she would haul away some of his junk when he was in Costa Rica. "McCarthy said Don told him his life was in danger, but didn’t say by whom, and if he was in danger, why did he bring home more cubs for me to have to raise?" The law agreed: Don's restraining order request was denied. In general, in order to receive a restraining order, the person requesting it has to prove a credible threat. Otherwise, threats like this fall under freedom of expression. As Don's lawyer Joseph Fritz said in the documentary, that restraining order was “dead on arrival” because of the first amendment. “We don’t restrain free speech in this country—we punish it after it’s done," he said.
His family said he felt he was in danger from Carole. His friends said the same thing—everyone closest to Don said he was terrified that Carole Baskin would do something to him.
Agree|Info|Expand
Don Lewis's family has since filed a lawsuit against Carole Baskin. Baskin responds here.
In the Netflix special, "Tiger King," members of his family read from the restraining order filed by Don Lewis. They affirmed their father's terror. One of the excerpts reads: "She ordered me out of the house or she would kill me." She allegedly had a gun and hid Don's gun from him. Furthermore, his daughter said that her father generally avoided going to law enforcement for any reason. So "for him to go down there and write that out and present it before a judge was major, in my eyes," she said. Another friend also said the same thing. Mark McCarthy told the documentary filmmakers that Don told him a month before he disappeared that he felt his life was in danger. Some of the people closest to Don therefore knew about his terror. And that fear centered around Carole.
CLOSURE
Did Don's mounting fear hint at his impending demise? His family and friend's certainly thought so.
Written by