Many Supporters of the Second Amendment Advocate for Red Flag Laws

They are a proven tool, drafted with strong due process protections, and enjoy strong bipartisan support.
December 4, 2020Updated 3 months ago 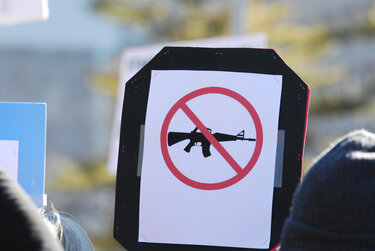 Louis.Roth / Shutterstock.com
4 Reasons
Fourteen states and many GOP senators support these laws. The measures go beyond politics to keep the community safe.
Agree|Info|Expand
Ronnie Chua/Shutterstock.com
Connecticut was the first state to pass red flag laws, and they have helped keep many people safe from mass shootings. In 1999, Connecticut enacted firearm seizure legislation following a mass shooting at the state lottery headquarters. Connecticut’s law requires an “independent investigation” by police if they believe that a person poses “a risk of imminent personal injury” to self or others, followed by a warrant request, with several formal checks on the judge’s ability to order the seizure and retention of firearms by law enforcement. Indiana was the second state. In 2005, after the fatal shooting of a police officer in Indianapolis, Indiana enacted firearm seizure laws. Indiana’s law permits warrantless seizure of a person’s firearms if a police officer believes the person has a “mental illness” and is “dangerous,” defined as an imminent or future “risk of personal injury” to self or others. Indiana’s firearm seizure law was associated with a 7.5% reduction in firearm suicides in the ten years following its enactment, larger than that seen in any comparison state by chance alone. Since then, other states have followed suit. Four states (California, Washington, Oregon, and Florida) have recently passed "extreme risk protection orders." Although the specifics of each piece of legislation vary, all of these laws allow risk-based firearm seizures that are time-limited, with a level of judicial oversight and due process, and that apply to persons who are not already prohibited from owning guns. To date, 19 other states have proposed such legislation, and federal policies are being considered. Even Senate Judiciary Chairman Lindsey Graham, R-S.C., in his opening remarks at the full Committee meeting, said he supports these laws and sought to downplay fears of second amendment infringement. "There are a lot of people [who] may be worried, 'Is the government going to come take your guns?' And the answer is, 'No,' " Graham said, hinting that one day he hopes there could be a federal process for law enforcement or family members to be able to petition a court signaling someone is "about to blow." Part of the reason for the reversal in political position is that public opinion has shifted. The New York Times reported that "a third of Americans reported that fear of a mass shooting stops them from going to certain public places, according to a survey by the American Psychological Association. Sixty percent say they’re worried about a mass shooting in their community."
Former President Donald Trump supported their passage. Despite being committed to protecting the Second Amendment, the then president changed his mind on red flag laws after a series of school shootings.
Agree|Info|Expand
Russ Vance / Shutterstock.com
The Federal Commission on School Safety, which was convened by President Trump following the shootings at Parkland and Santa Fe, recently endorsed Red Flag laws as an effective tool to prevent school gun violence. He has called on states to adopt “extreme risk protection order” (ERPO) laws that protect the due process rights of law-abiding citizens. ERPOs allow law enforcement, with approval from a court, to remove firearms from individuals who are a demonstrated threat to themselves or others and temporarily to prevent individuals from purchasing new firearms. President Trump supports improving the National Instant Criminal Background Check System (NICS) and the STOP School Violence Act, which provides for State-based grants to implement evidence-based violence prevention programs. The Administration requests that Congress provide funding in 2018 to jump start implementation of this evidence-based program in middle and high schools nationwide.
Even the NRA supports Red Flag laws as long as they are restricted. The powerful lobbying organization recognizes that the right to bear arms and the need to stop dangerous criminals are two goals that don't need to be at odds.
Agree|Info|Expand
80schild/Shutterstock.com
"We need to stop dangerous people before they act," Chris W. Cox, executive director of the National Rifle Association's Institute for Legislative Action said. "So Congress should provide funding to states to adopt risk protection orders," he said in a somewhat shocking support of at least a small restriction on gun ownership by those who are seen as threats to the community in which they live. The NRA's support for red flag laws comes with the condition that there be high legal thresholds for temporary gun removals — higher than most gun control activists call for. But gun control groups have assumed the NRA strictly opposes such laws, which is not true.
Mike Bloomberg is also both a Second Amendment and Red Flag law supporter. He is an example of a politician who can toe the line between both.
Agree|Info|Expand
At the 00:30 mark of the video, Bloomberg confirms that he supports the right to bear arms but nonetheless believes in red flag laws.
Politician and business leader Mike Bloomberg supports both the right to bear arms and the need for red flag laws. Bloomberg's opinion is important in this instance because his thoughts on the matter mirror that of many Americans. Centrists like Bloomberg don't want to permanently change the Constitution, particularly an amendment part of the Bill of Rights. But, they don't want people who police deem a danger to their communities roaming about with the ability to purchase and own multiple firearms and deadly weapons. Many, like Bloomberg, feel that if you pass a background check, don't have a criminal record of violent offenses, and police have not deemed you a risk mentally or emotionally—then you should be able to own a firearm. Bloomberg is just one of many politicians—both on the left and the right—who support both red flag laws and the Second Amendment.
CLOSURE
Red flag laws are more than just commonsense: they are supported by those on he left and the right. This bipartisan support extends even to the NRA.
Written by